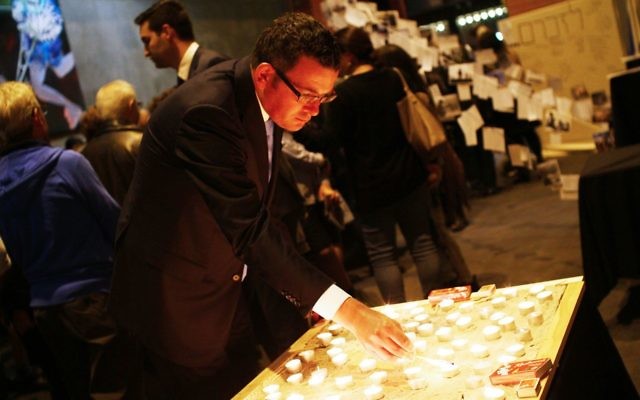 MORE than 1200 people turned out to mark Yom Hazikaron at ceremonies in Sydney and Melbourne last week.

The NSW ceremony at the National Council of Jewish Women, run annually by the Zionist Council of New South Wales (ZCNSW), saw the crowd moved by prayers, musical tributes and stories of fallen soldiers.

In welcoming attendees, ZCNSW president Richard Balkin reflected on the tragedies of the past year.

“Who can forget the young faces of these modern-day heroes of the Jewish people? Who can forget our three boys, Eyal, Naftali and Gilad? Three innocent teenagers kidnapped and brutally murdered. And who can forget the massacre of Jews at morning prayers in the holy city of Jerusalem,” Balkin appealed.

“That, ladies and gentleman, is why we are here tonight. Because we have not forgotten.”

Representatives from Sydney’s Jewish schools and the Board of Jewish Education (BJE) shared stories of three fallen Israeli soldiers.

“It is our duty to remember them. To respect their sacrifice, to honour their memories,” said Moriah College student Zac Morris, as he shared the story of Shahar Dauber, a 20-year-old IDF paratrooper killed in Gaza.

BJE students spoke about Ohad Shemesh, who lost his life in a clash between his unit and Hamas militants in the Gazan city of Khan Yunis. The 27-year-old was married just five months before he died.

A standout of the evening was year 11 Emanuel School student Dean Smuskowitz, who performed The Song for Sergeant Gottlieb, which he composed himself in memory of fallen IDF soldier Matan Gottlieb.

The Zionist Youth Council (ZYC) band performed songs including Millions of Stars, which was written to commemorate the life of Tom Farkash, a soldier who died in a helicopter crash during the Second Lebanon War in 2006.

Four members of the IDF band, in Australia to perform at the ZCNSW Israel Solidarity Concert this Sunday, also sang, as well as four young Israeli advocates.

Additionally, Shimon Alankri, currently in Australia as a guest of the Zahal Disabled Veterans Organisation, addressed the event.

Alankri spoke of the day in 2012 when his jeep was directly hit by an anti-tank missile, which, when it exploded, sent shrapnel through his eyes and body. He was seriously injured, but by “a huge miracle”, survived and has been rehabilitated.

“Being here in Sydney, in this incredible Jewish community, that is so supportive of Israel, is very special for me,” Alankri said. “It is truly wonderful, and very humbling, to know that we are not alone, and there are Jewish communities around the world that care so much about the State of Israel and its people.”

In Victoria, meanwhile, the soldier who led the search party that found the three Israeli teenagers – Gilad Shaar, Naftali Frenkel and Eyal Yifrach – who were killed by Hamas retold his account of that fateful day when he spoke to more than 900 people at Melbourne’s Yom Hazikaron commemoration.

Malachi (surname withheld for security reasons) said that on the 18th day of the search for the missing teenagers he escorted a group of civilians to a hostile area because they had a different idea of where to look.

“Later on that day, one of them spotted an unusual pile of rocks and told me they want to dig there,” Goldman said.

He said that the civilian, together with two soldiers, dug for an hour and brought the search to an end.

“It was a sad day for us, but we also knew that we gave families and the whole nation the ability to go on with their lives and a grave to mourn on in the days to come.”

The event, which was hosted by the Zionist Council of Victoria in partnership with United Israel Appeal, was attended by Victorian Premier Daniel Andrews and Israel’s ambassador to Australia Shmuel Ben-Shmuel, who said that Yom Hazikaron is a day of collective and personal anguish.

“No mother should bury her own son. No father should read Kaddish at his child’s grave.

He said the soldiers that died were ordinary, but special, people.

Candles were lit in honour of last descendants, who had been the sole remaining survivors of their families from the Holocaust and then died in the War of Independence, as well as for soldiers Avi Klinger, Yehuda Pakula, Shon Mondshine and terrorism victim Dalia Lemkus.

Pakula was remember by his sister Shyrla Werdiger as “a bit of a character” who made aliyah as a teenager to discover his roots, visit ancient places, be a part of the story of Israel and because he had been the target of anti-Semitic attacks in Melbourne.

“He bought a one-way ticket to Israel and swore he would never return to Australia,” Werdiger remembered.

At the age of 22, while serving in the IDF, he was positioned near the border with Egypt when the Yom Kippur war broke out.

Pakula was listed as missing in action, and it wasn’t until 1978 that his body was recovered and it was possible to bury him.