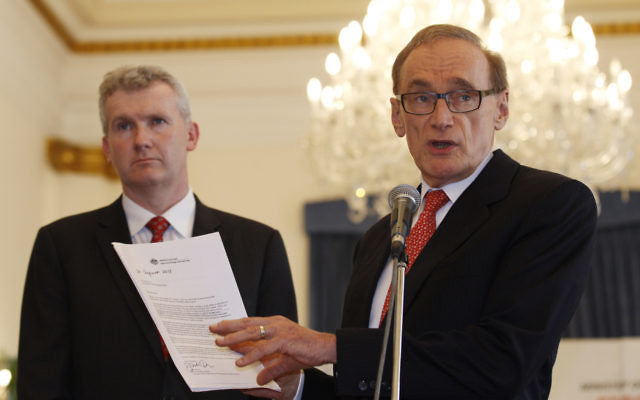 NSW Labor delegates to this weekend’s state conference have proposed more motions on the Israeli-Palestinian conflict than on the environment or Indigenous affairs … and more than all other motions concerning foreign policy put together.

The AJN can reveal that there are 18 policy agenda items relating to Indigenous affairs and 24 about the environment. But there are a staggering 28 motions regarding Israel, most of them critical, out of the entire 45 foreign policy items up for discussion.

Meanwhile, a number condemn Israeli violence and mistreatment of the Palestinians, while blaming Israel for the failure to achieve peace. But not one condemns Palestinian terror or incitement, or the reluctance of the Palestinian leadership to come to the negotiating table.

Chair of the NSW ALP international affairs policy committee Michael Forshaw told The AJN that “the continuing focus on this [Israeli-Palestinian] issue among some branches in the ALP is unfortunate”.

Noting that there are several other conflicts in unstable areas across the world, he said, “There are sadly many thousands of people of different faiths and ethnicities that are either being killed, or executed, or tortured, or driven out as refugees, in particular in Syria and Iraq.

“While Israel and Palestine is an ongoing issue, and has been for many years, it is a matter of concern to me that some people want to focus on it to the exclusion of a lot of other problems, and continue to want to demonise Israel and ignore the conduct of a whole lot of other regimes in the same area.”

Forshaw added that motions that seek to prevent MPs or officials from travelling to Israel are “outrageous”, “totally unacceptable” and would break a longstanding tradition that allows members to travel without restrictions.

“We may not agree with people’s views, but the idea to prevent people from travelling or prescribe how they might undertake their travel is something we don’t want to see in Australian politics.”

Forshaw’s committee will recommend that delegates reject a motion to ban Labor MPs, officials and Young Labor members from accepting subsidised trips to Israel, and a second motion calling upon all Labor MPs visiting Israel on sponsored trips to spend equal time in Palestinian territories. Delegates will be encouraged to support an alternative motion that “encourages” MPs to also visit the Palestinian territories.

Delegates will also be recommended to support a motion endorsing the resolution carried at the ALP national conference last year, which states that if the next round of negotiations between Israel and the Palestinians fail, the party will consider recognition of a Palestinian state.

While supporting a two-state solution and rejecting BDS, the resolution singles out Israeli settlement building as a “roadblock to peace”, states that all “settlements are illegal”, that East Jerusalem is “occupied territory”, and singles out comments by Benjamin Netanyahu for condemnation while remaining silent on incitement to violence from Palestinian leaders.

Executive Council of Australian Jewry executive director Peter Wertheim said the fact that 28 of the 45 foreign policy agenda items relate to the conflict between Israel and the Palestinians “indicates either that certain NSW ALP branches have allowed themselves to be used in an orchestrated campaign by anti-Israel obsessives within the party, or that they are completely out of touch with the concerns of ordinary Australians, or both”.

“At a time of mass murder and displacement of innocent civilians in many parts of the Middle East and Africa, of a massive increase in the world’s refugee population and an openly declared war of annihilation against Western civilisation by Islamist terrorist groups, it is ludicrous for the NSW ALP to devote two-thirds of its foreign policy agenda items to the Israeli-Palestinian conflict, and to direct them all against the region’s only functioning democracy,” Wertheim said.

He also said it is encouraging that the international affairs policy committee is recommending a rejection of a proposal for MPs visiting Israel on sponsored trips to spend equal time in Palestine. “If passed, this proposal would imply a lack of confidence by Labor in the intelligence and integrity of its own MPs in making up their own minds about what they see and hear on these trips.

“If Labor is not prepared to trust its own MPs, why should the voters?”