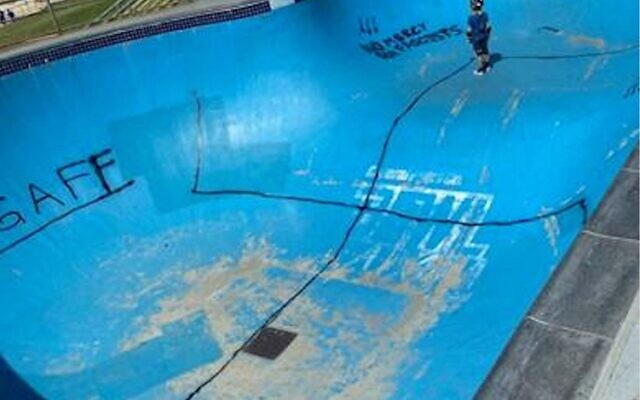 The swastika daubed on the skatepark in Bondi.

BONDI Beach has again been targeted with swastika graffiti in what has been described as a “reprehensible act of vandalism”.

The offensive symbol was found defacing the famous beach’s skate park just days before a Victorian parliamentary committee recommended making it a criminal offence to “display symbols of Nazi ideology, including the swastika”.

In a separate incident, a Jewish couple has been forced to flee their apartment block after a spate of swastikas made them “feel frightened and unwelcome in what’s supposed to be our home”.

The NSW government had previously said it was awaiting the results of the Victorian inquiry after calls grew louder last year to ban the symbol here.

“The government will closely consider any recommendations it may make on this issue,” Attorney-General Mark Speakman said at the time.

#BREAKING A Victorian government inquiry into anti‐vilification protections has just handed down its findings,…

Posted by The Australian Jewish News on Tuesday, March 2, 2021

The Victorian report states that “it is important to send a clear message to the community that Nazi symbolism is not acceptable in any form and has wide-ranging, negative societal impacts”.

“It [the committee] recommends that the Victorian government establish a criminal offence that prohibits the display of symbols of Nazi ideology, including the Nazi swastika,” it says.

Vaucluse MP Gabrielle Upton, who wrote to the Attorney-General last April about the issue, told The AJN this week, “I was appalled to also see the Nazi swastika appear again at Bondi Beach over the weekend.

“I strongly urge that government action be taken to end the offensive and deplorable use of the Nazi swastika and other symbols including the flag.”

Offering to work with Upton to advance a ban, Labor MLC and NSW Parliamentary Friends of Israel deputy chair Walt Secord urged the government to “get on with the job” of banning the swastika flag.

“I want to say to the Victorian Parliament: bravo. This is a historic recommendation, which NSW should follow immediately,” he said.

“It is no coincidence that those responsible for this reprehensible act of vandalism chose to do it in Bondi,” he said.

“Outlawing the swastika would deliver an important message that the display of this hateful symbol is unacceptable in a civilised society.[It] would be an important tool in combating right-wing extremism, but to maximise its effectiveness it would need to be part of a broad strategy of countering racism and extremism.”

Executive Council of Australian Jewry co-CEO Peter Wertheim added, “We welcome the assurances given by the NSW government that it will carefully consider any recommendations to come out of the Victorian inquiry, and we especially look forward to any initiatives it may take in the education sector from primary school onwards to counteract prejudice and extremism.”

The Bondi swastika, discovered by a council officer on Sunday morning two years after the Nazi symbol was daubed along the famous beach’s promenade in February 2019, was promptly removed by council staff.

Waverley Councillor Leon Goltsman lamented while the local community was diverse, tight-knit and accepting, “there’s always going to be a few people who will go out and spread hate”. 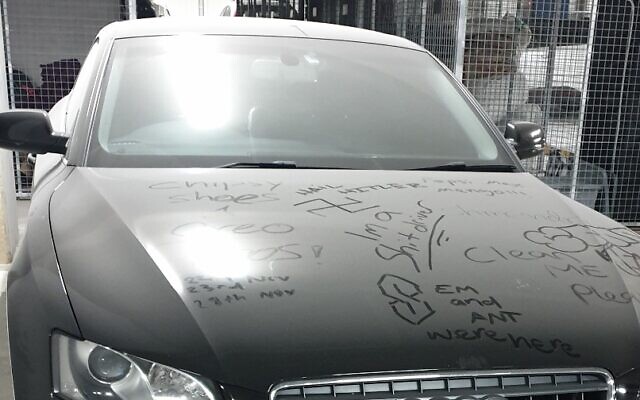 The swastika and offensive slogan in the dust of a car parked in Zetland.

Meanwhile, Sarah Littky and her husband left their Zetland apartment block after a spate of swastikas, Nazi slogans and other offensive phrases were scrawled in common areas over a period of more than six months.

The couple moved into the property in June 2020 to find two swastikas in two lifts, which they reported to building management.

In early December, after multiple requests by the couple had still not resulted in any action, the couple reported the matter to Mascot Police after they discovered the phrase “Hail (sic) Hitler” and a swastika outlined in the dust of a parked car.

“We are a primarily Jewish, Israeli-American household with family who have died in the Holocaust and who have personally experienced antisemitism in the US,” Littky said.

“Seeing these symbols made us feel frightened and unwelcome in what’s supposed to be our home.”

When the couple moved out earlier this week, she said the swastikas – more appeared in January while one she herself covered up with a COVID-safe poster – remained.

Heffron MP Ron Hoenig, whose electorate takes in Zetland, called the swastika “the ultimate symbol of genocide and hatred”.

“For it to be etched into the walls of someone’s home is a disgrace. It is offensive to the very fabric of humanity,” Hoenig, the son of Holocaust survivors, said.

“All around the world, the far right is becoming more bold, more energised, and more visible, and Australia is no exception.

“We must act to stamp out neo-Nazism and antisemitism wherever and whenever it rears its ugly head.

“I would legislate that the swastika and other Nazi symbols should be banned from public display, but I accept that the NSW Government needs to examine the recommendations of the Victorian Parliament’s inquiry promptly before proceeding swiftly.”