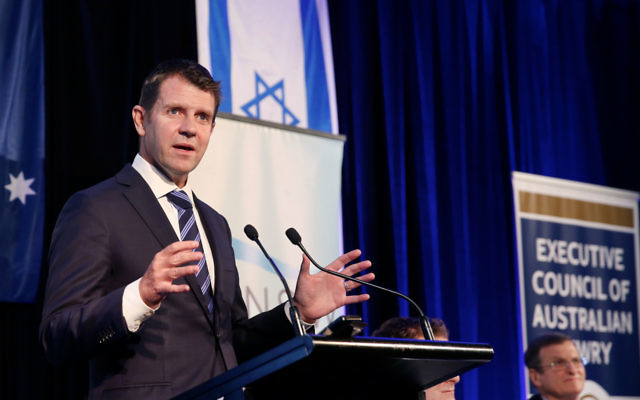 NSW Premier Mike Baird spoke of his “life-changing” trip to Israel, and proposed a toast to the Jewish State, when he addressed a 700-strong crowd at the communal Yom Ha’atzmaut reception in Sydney last week.

Baird was the guest of honour at the cocktail event, which was attended by the who’s who of the community, along with Israeli ambassador Shmuel Ben-Shmuel; Minister for Resources, Energy and Northern Australia Josh Frydenberg; NSW Opposition Leader Luke Foley; communal leaders; and various diplomatic and religious group representatives.

“You go on trips at times and they’re fantastic, you enjoy them and the challenge, and then you go on a trip that’s life-changing. I can assure you it’s exactly what it was,” Baird enthused.

“Nobody can tell you about the Old City until you stand in the Old City. You can see the pictures of the Wailing Wall, but to have the honour of standing there with so many people and understanding how significant that site is, [it’s something] I’ll never ever forget.

“I’ll remember the Sea of Galilee – how could something be so beautiful, remarkable and so full of history in one package? [It was] just an incredible experience.”

But at the same time, Baird said, “I don’t think anyone can understand Israel or the Jewish people in full, from the outside that is, unless you have been to Yad Vashem.

“And I think if you understand that history, you’re also filled with this incredible sense of wonder – how can this nation, which has been through so much, be back and contributing and leading the world in so many ways? It is truly remarkable.”

Stating that the trip “from a trade and economic point of view was incredible”, he added, “I count it as an absolute privilege to be the first Premier of this state to visit Israel. It was long overdue.”

Also addressing the crowd, NSW Jewish Board of Deputies president Jeremy Spinak said, “On the first day of the mission the Premier told us that he wanted to build a highway between Israel and NSW.

“If the Premier’s highway is as strong and meaningful as the bridge he has built to our Jewish community it will be very effective indeed.”

Spinak said that in so many areas “we find in his government a willing partner and friendly ear”.

“Many people we met remarked at how lucky we are in NSW to have a leader that so strongly supports our community and the partnership with Israel.”

Spinak later told The AJN: “The event was a great success in terms of the large number of guests, the diversity of organisations represented and the impressive speech by the Premier expressing admiration for Israel’s can-do spirit and innovative nature.

“It was very gratifying to see almost 700 people turn out to stand with Israel and our community.”