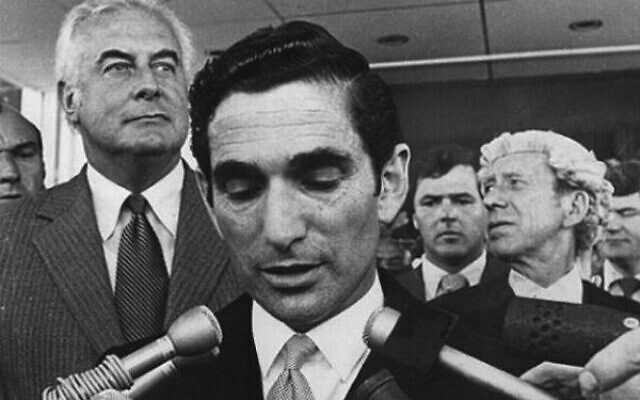 CANBERRA’s Jewish and wider community is mourning the passing of Sir David Smith, 89, the iconic figure who triggered prime minister Gough Whitlam’s famous condemnation of a governor-general after his government was sacked in 1975.

Sir David had been official secretary of the governor-general – at that time Sir John Kerr. He stood before a crowd on the steps of Parliament House – now Old Parliament House – on November 11, 1975, and read from a notice that the Senate and House of Representatives had been dissolved, ending with “God Save the Queen.”

It prompted Whitlam, standing next to Sir David, to retort, “Well may we say ‘God Save the Queen’ – because nothing will save the Governor-General.”

Sir David’s words ceremonially ended the Whitlam government after its vice-regal dismissal, following weeks of supply being denied by the Coalition-controlled Senate. On December 13, Australians elected a Coalition government under prime minister Malcolm Fraser. But the shockwaves of November 11 would reverberate down the decades.

A trenchant critic of Whitlam, who died in 2014, Sir David always maintained, contrary to some beliefs, that there had been no negotiations between the governor-general and Fraser before the government’s dismissal.

In 2004, Sir David was panned by then ALP leader Mark Latham for giving a lecture strongly critical of Whitlam. Echoing the ALP’s 1972 “It’s Time” campaign slogan, Sir David had stated, “It’s time [Whitlam] said sorry to his party for being such a failure as leader … and for giving us the most incompetent government we have ever had, and it’s time that he told the truth about the events of 1975.”

Interviewed by The AJN afterwards, Sir David defended his words. “I’ve got no personal axe to grind. I’m just interested in our political and constitutional history being accurately recorded.”

Born in Melbourne in 1933 to Polish immigrant parents named Szmitkowski, and growing up in Carlton, he moved to Canberra in 1957 to advance his public service career. Sir David would become secretary to five governors-general. He received a knighthood in 1990 and was awarded the Centenary Medal for services in the office of the governor-general in 2003.

A spokesperson for the ACT Jewish Community Centre this week paid tribute to Sir David, who was on the centre’s board when its foundation stone was laid in 1962.

“[Sir David] was involved in a voluntary capacity with many organisations including scouting, the Canberra Symphony Orchestra, Alzheimer’s Australia and Australians for a Constitutional Monarchy.”