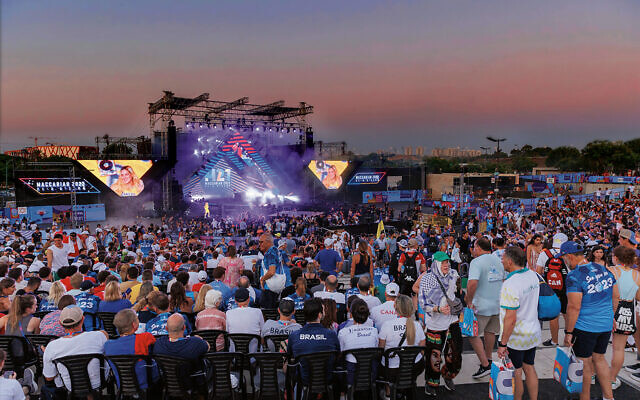 And just like that, it was party time at the 21st Maccabiah Games closing ceremony on July 25 at Rishon LeZion’s Live Park, for the 10,000 participating Jewish athletes from all over the world – including Australia – following an unforgettable fortnight of sporting achievements, camaraderie, friendships and connections with Israel’s people and culture.

For Australia’s largest delegation of more than 620 people – including 538 athletes and more than 85 volunteers – their Games experience began on July 7 with a successful pre-camp of training, acclimatising and bonding in Netanya.

And it came to a conclusion with the Aussies achieving one of their best results, coming third in the overall medal count, with 99, according to the official Maccabiah Games tally updated on July 26.

Australia’s 23 golds, 32 silvers and 44 bronzes, put them only behind Israel and the USA, although on the basis of gold medals won, Australia came fourth, pipped by Argentina, which claimed 33 golds.

With Australia’s junior, open and masters athletes competing in 20 different sports on a daily basis across Israel, there were so many amazing moments for individual athletes and teams.

Just some of the highlights that will be remembered for years include our record four netball teams winning medals on the same day – including three golds; our women’s futsal team winning their gold medal match in a heart-stopping penalty shootout; women’s masters athlete Nicole Katz winning gold in the half marathon in Jerusalem without initially realising it; veteran golfer Roy Vandersluis winning the men’s grandmasters title in his 12th consecutive Maccabiah Games; and huge medal hauls by our athletics and swimming teams.

There were magical moments away from the sporting arena too, including marching into Jerusalem’s Teddy Stadium behind co-Australian flagbearers Jon Pillemer (appointed the team captain) and Lauren Ehrlich in the Opening Ceremony – attended by US President Joe Biden – and singing Hatikvah together as one.

A tour of Jerusalem’s Old City, culminating in a visit to the Kotel as an entire delegation, was another ‘wow factor’ moment.

And there was even a Maccabi LIFE VIP Supporters Mission, led by Maccabi Australia president Jeff Sher, which combined sightseeing tours, impressive guest speakers and plenty of opportunities to watch the Aussie athletes compete.

What was notable throughout was the way the Australian athletes and volunteers attended each other’s matches and tournaments in big numbers to cheer each other on – often accompanied by an inflatable green and gold boxing kangaroo, or a big Aussie flag.

They really did live up to the delegation’s motto of ‘One Team, One Dream”.

Bring on the 2025 Maccabiah Games!

For all coverage, visit our dedicated 2022 Maccabiah Games page.