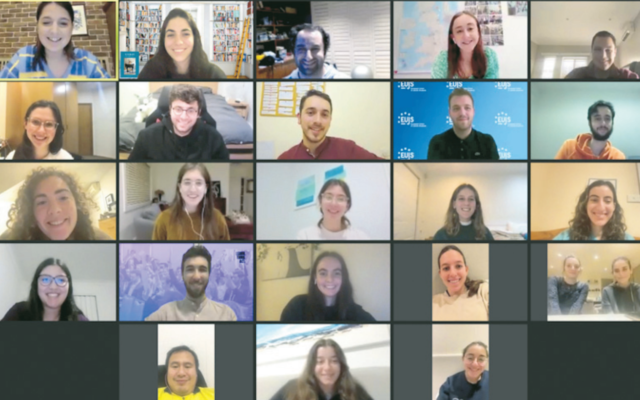 Antisemitism is often referred to as the “oldest hatred”. As society has modernised and developed, so has the nature of antisemitism. In all its variations, one thing stays stagnant – the demonisation and scapegoating of the Jews.

For decades, university campuses have been the frontline of the rise of antisemitism. This phenomenon is not new, but what the recent conflict with Gaza has taught me is that the reach of antisemitic sentiment is getting wider.

Across Australia and New Zealand, we at the Australasian Union of Jewish Students (AUJS) have seen Jewish students threatened for our values, lecturers calling for Israel’s destruction, Student Representative Councils releasing statements denying Jewish self-determination and a concerning increase in reports of antisemitic incidents.

I grew up in a Modern Orthodox family. I attended Masada College and went on Bnei Akiva gap year Limmud. During high school, I considered myself highly educated on Israel and was always having conversations with my friends and posting on social media.

However, once I started my politics and media degree, I quickly realised that the nature of conversations both within the classroom and on campus were entirely different to what I was used to. Even though I was confident in my own opinions, I found it increasingly difficult to get myself heard and respected in an environment which is dominated by onesided narratives, cancel culture and political polarisation – which more often than not excludes Jewish voices.

In this environment, I alongside many other Jewish students, felt unprepared to engage in constructive dialogue. Undermining Israel’s legitimacy as a state is undermining the story and culture of the Jewish people, and is therefore inherently antisemitic. However, when we confront the antisemitism which is wrapped up into criticism of Israel and Zionism, we receive little to no support from university authorities.

Standing up against bigotry and hatred from wherever it comes should not be something we need to ask for twice. However, Jewish students are facing an onslaught from every direction. More often than not, we face criticism from those who have little understanding of the conflict, have never met a Jewish person before and hold shallow perceptions of our community and our connection to Israel.

The question we face as AUJS, and as a community, is how to effectively empower and upskill Jewish students so they have the confidence to call out antisemitism in all of its forms?

Coming into my role at AUJS at the beginning of this year, I knew how important standing up for Israel was for me and many of my fellow students, and I know how hard this can be on campus. This motivated me to launch the inaugural Accelerate program which is a proactive approach to combating antisemitism by providing students with the opportunity and support they need. In order for the rising levels of antisemitism to be taken seriously on campuses, Jewish students need to have a seat at the table. They need to have the confidence to define antisemitism in order to combat it.

Over the three days of the program, we planned for participants to have the opportunity to broaden their understanding of the conflict. The seminar was to touch on complex topics including the history of Zionism; provide practical skills such as how to effectively read news and how to engage in difficult conversations. By bringing together a diverse group of students from across Australia and New Zealand, we hope Accelerate establishes a network of individuals who can learn from and support one another.

Unfortunately, due to COVID we had to postpone the in-person seminar, however we were able to facilitate engaging and informative sessions online with speakers from overseas. On July 13, we hosted a conversation with Gil Hoffman, the chief political correspondent for The Jerusalem Post, who joined us live from the Knesset press room. As a facilitator, I am still on my own journey to feeling empowered on campus and it was not only great to be able to provide an opportunity to speak with an expert, but it was through this engaging and honest conversation that we saw an abundance of questions coming in from participants, looking to deepen their own understanding.

The panel showed me that the challenges that we face on campus as Jewish students are global, and in every region there is a group of dedicated students working to change the narrative. I saw the impact that building strong relationships with the wider student body has on campuses around the world, and the conversation only reinforced to all of us the importance of investing in the education of our students to create a proud, proactive and confident global Jewish student voice.

Through talking about our common challenges and sharing our experiences, I was able to reflect on the way we work on campus in Australia and New Zealand, and understand that we have a network of support both within our community and around the world.

As Accelerate participant Josh Feldman reflected, “The latest Israel-Gaza conflict reminded our community how badly we need to educate ourselves, and others, on Israel and antisemitism – especially the youth. By giving us the opportunity to ask experts on Israel and antisemitism the tough questions, Accelerate created a brilliant grassroots forum which tackled the most pressing issues to young Jews.”

There is a lack of education about modern-day antisemitism on university campuses. The general student body is not aware of the dangerous lines that are being crossed from valid criticism of Israel to the exclusion of Jewish voices. In this environment, being heard can be difficult. However, if Accelerate is able to provide students with greater confidence and pride in their own connection to Israel, and therefore the drive to engage in dialogue, then we have taken an excellent first step towards safer campuses for Jewish students.