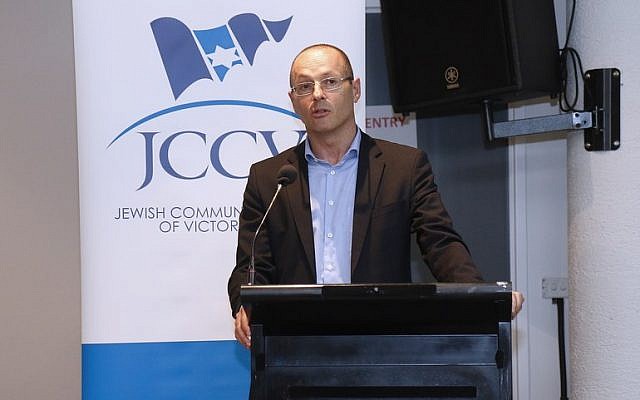 ANTON Hermann was this week remembered as a principled, compassionate Jewish leader, “a true gentleman” and “one of the good guys” after his tragic death in a cycling accident in Queensland.

The Jewish Community Council of Victoria (JCCV) vice-president was cycling near Port Douglas over the weekend when his bike and a motor vehicle collided. Hermann was critically injured and died at the scene.

Tributes have flowed for the 53-year-old, who completed school at Mount Scopus College in 1983, before studying Law at Monash University where he became active in the Australasian Union of Jewish Students.

Hermann’s career saw him work as a journalist at The AJN and as chief of staff to a Victorian state minister. He stood for a state seat, then joined the Liberal Party, where he remained for life.

Hermann joined law firm Minter Ellison, where his work was pro bono, becoming its director of pro bono and community investment. He stated, “Working to deliver social impact – in conjunction with my colleagues and our long-term community partners – is a privilege and personal passion.”

Joining the JCCV executive in 2013, Hermann became a member of its Child Protection Reference Group. In 2016, he became JCCV vice-president, using his legal expertise to guide the roof body.

For JCCV president Jennifer Huppert, Hermann was “a close friend … a very special man, who devoted his time to his family, his friends and his community”.

The JCCV stated, “The sudden passing of Anton will be felt across the Jewish and wider Melbourne community owing to his genuine care and knowledge to bridge differences across political, religious and legal spheres, together with his personable, empathetic and honest approach.”

The sentiment was shared by other Jewish roof bodies and organisations across Australia.

Stating, “We are devastated,” the Executive Council of Australian Jewry described Hermann as “a devoted family man, a talented lawyer and a longstanding activist”.

NSW Jewish Board of Deputies acting president Isabelle Shapiro mourned Hermann as “a stalwart of the community”.

Calling Hermann’s death “heartbreaking”, Australia/Israel & Jewish Affairs Council executive director Colin Rubenstein recounted, “I was privileged to know Anton during and after his student days at Monash University. He was not only a gifted student and delightful young man, but also displayed maturity and sophistication beyond his years as an impressive young political aspirant … always communally minded and supportive.”

Zionism Victoria president Sharene Hambur described him as “a tireless worker … a true gentleman”, and Zionist Federation of Australia president Jeremy Leibler spoke of the “devastating loss of a community leader who contributed so much … often behind the scenes”.

Anti-Defamation Commission chair Dvir Abramovich remembered “a gracious, caring and kind man, who devoted himself to the community and to a variety of causes”.

Victorian Liberal Leader Michael O’Brien stated, “Having first met Anton many years ago, and knowing him both personally and professionally, I pay tribute to his longstanding commitment to improve the lives of others,” while for Caulfield MP David Southwick, Hermann “was a wonderful person with a huge heart” and “a devoted party member”.

In April this year, Hermann was a vocal supporter of a JCCV apology to Jewish gay group Aleph Melbourne for the JCCV’s refusal to admit Aleph as a member group in 1999, proposing an apology motion that was overwhelmingly adopted.

Michael Barnett, convenor of Aleph Melbourne, saw Hermann’s navigation of the JCCV apology as “just one of many actions of Anton’s that had a positive and uplifting social impact in relation to the Jewish community, the LGBTIQ community, and the broader community”.

Australian Jewish Democratic Society executive member Sivan Barak added, “Our work together on the historic apology to Aleph was handled by Anton with kindness and genuine inclusiveness.”

Rabbi Alex Tsykin of Brighton Shule, where Hermann was a longtime congregant and honorary solicitor, remembered him as “quiet and caring; he said little but did a great deal”.

A keen cyclist, Hermann cycled daily and was in the Maccabi Victoria Cycling Club.