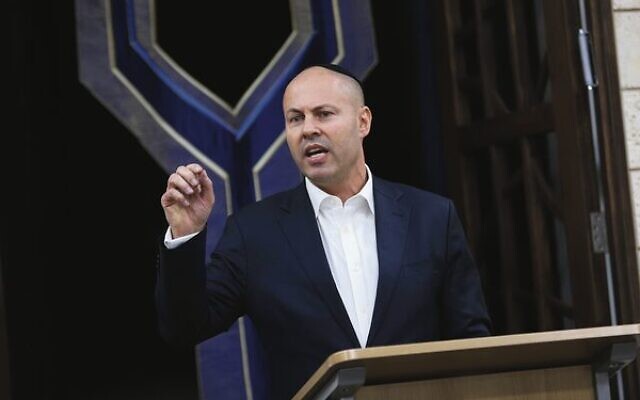 Josh Frydenberg speaking at the Ark Centre in the lead up to Pesach. Photo: Peter Haskin

WE’RE at the Melbourne Hebrew Congregation on Yom Hashoah. How important is it to have Holocaust centres and museums in all states and territories, as we now will soon have?

I don’t think you can over-estimate what a significant development this will be for Holocaust education in Australia – for continuity of memory, to honour the victims and to ensure that we uphold our collective duty to say “never again”.

We don’t have any plans to change our policy. But no one can question the steadfast support of Israel that [Prime Minister] Scott Morrison has provided and his government has provided over many years.

What are your views on the now shelved Religious Discrimination Bill? The PM has pledged now to reintroduce it and not accept any changes in related legislation. Is that realistic?

Well, it remains a policy of the government. And, you know, we’ll continue to advocate for the protection of religious freedom.

The Coalition’s commitment to net zero emissions is firm, clear, non-negotiable. I was a strong advocate for Australia reaching net zero emissions by 2050. I continue to do so, based on a detailed, costed plan, to reduce our carbon footprint, while also increasing the reliability and stability of our grid and reducing electricity prices.

‘I’ve never been afraid to wear my Jewishness on my sleeve.’
Josh Frydenberg Federal Treasurer

What lessons have you learned from the pandemic era about government?

Well, we worked very closely with the public service and particularly the health officials. And you learn in these crises there is no playbook. The speed of decision making is important. But also continuing with good processes – and we maintained our cabinet process throughout.

The fact that Australia is now seen as one of the strongest economic recoveries anywhere in the world is a testament to not just good economic policy from the government but the hard work of 26 million Australians, including particularly the incredible support of our health professionals, our defence force and all others who are on the front line.

Turning to electoral matters, your 2019 margin in Kooyong was 6.4 per cent. How do you view your prospects on May 21? And what are your views about the independents who are running in various key seats?

Well, my contest will be close. I don’t take anything for granted. And I’m very encouraged by the fact that I’ve won the support of my community at the last four elections. And my community knows I work hard for them and also have worked hard for Australia more broadly as the Treasurer. But I’m from my community and for my community. 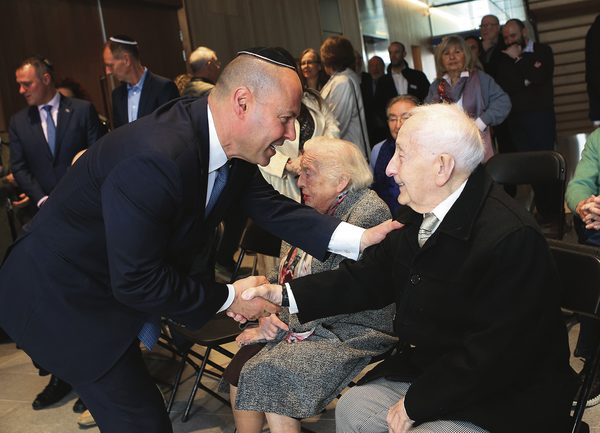 Can you talk about your longer-term aims in politics? And if things don’t go to plan for the government on May 21, do you see yourself as the next Liberal leader?

It’s not a discussion I’m entertaining. I’m very focused on winning my seat, continuing as Treasurer, supporting Scott Morrison and the government more broadly. There’s a lot of work still to do.

I’m proud of what has been achieved over the last few years, particularly steering the economy through its biggest economic shock since the Great Depression. But Australia faces major economic security and national security challenges and now’s not the time to roll the dice on a weak Labor leader, on fake independents, and increase the likelihood, the possibility of a hung Parliament.

And finally, a reflective question: How has your Jewish upbringing inspired your political journey?

It’s been a fundamental influence on my life and defining who I am. And in my values. My Jewishness is central to me. It’s fundamental to who I am. I love the tradition, I respect the history, and I’m committed to the values that are part of the Jewish faith. I’ve never been afraid to wear my Jewishness on my sleeve. And I feel very fortunate to be in a political party where that’s been respected and that’s been encouraged, and where I’ve never felt that it’s a hindrance to what I want to achieve in public life.

This interview was conducted on April 28.