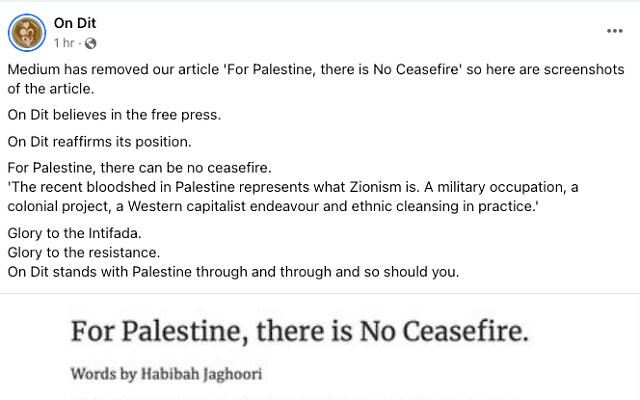 Online publisher Medium has removed an article by an Adelaide student publication calling for “Death to Israel”.

The On Dit article For Palestine, There is No Ceasefire, written by the Adelaide University student magazine’s editor Habibah Jaghoori, called for the abolition of Israel.

Referring to Israel’s Operation Breaking Dawn operation against Palestinian Islamic Jihad terrorist targets in Gaza, she wrote, “The recent bloodshed in Palestine represents what Zionism is … A military occupation, a colonial project, a Western capitalist endeavour and ethnic cleansing in practice.

“As long as Israel exists then the genocide and occupation of Palestine will exist.”

In an email to The AJN that she signed off with “Death to Israel”, Jaghoori said the phrase meant “death to the state, to the war criminal IDF, to the occupations and to Zionism”.

The Online Hate Prevention Institute (OHPI) said it contacted Medium, which has rules against “threats of violence and incitement” and “hateful content”, who reviewed it and confirmed it violated its rules.

“Medium’s response to our notification and their removal of the antisemitic article was timely, effective, and in keeping with their global policies,” OHPI CEO Andre Oboler said.

“It is concerning that a publication that supposedly operates under editorial oversight, and is associated with a University, would allow such a blatant example of antisemitism to be published and would need their platform provider to intervene.”

However, Oboler told The AJN that the images of the article have since been posted on Facebook, and OHPI has approached Meta in response.

“Instead, they keep doubling down, reposting the content, reiterating they stand behind it. This is not journalism. It is not a mistake. It is propaganda designed to fuel terrorism and incite genocide. It raises serious questions for university authorities and beyond.”

Zionist Federation of Australia (ZFA) president Jeremy Leibler sent a letter to Adelaide University Chancellor Catherine Bensen earlier this week, outlining the implications the article has on the safety and wellbeing of Jewish students.

“The university is yet to respond to any of the substantive concerns or condemn the article,” Leibler said.

“The University of Adelaide’s failure to condemn an editorial that at best is hate speech and at worst an incitement to violence is extremely distressing and sends a dangerous message to Jewish students on campus.”

“It is somewhat bizarre that the company that hosts On Dit was in a position to identify this article as hate speech but the university is unable to do so.”

In a reply to the ZFA, University of Adelaide Acting Vice-Chancellor and President Professor Anton Middelberg said “the views expressed in the article are not the views of the university”.

“The University deplores religious and racial discrimination including antisemitism,” he said.

He said concerns over the article would be raised directly with the On Dit editorial team “with a view to establishing better editorial practices in the future”.

He said the university’s protection of academic freedom and lawful freedom of speech is reflected in its Freedom of Speech Policy.

“We are committed to treating others in a fair and non-discriminatory manner. All members of the University community have a fundamental right to feel safe from discrimination and persecution, and to feel welcome and respected on our campuses,” he said.

“This article has led to some members of our community feeling vilified and unsafe. The University has reached out to students who have expressed concern and continues to offer support.”