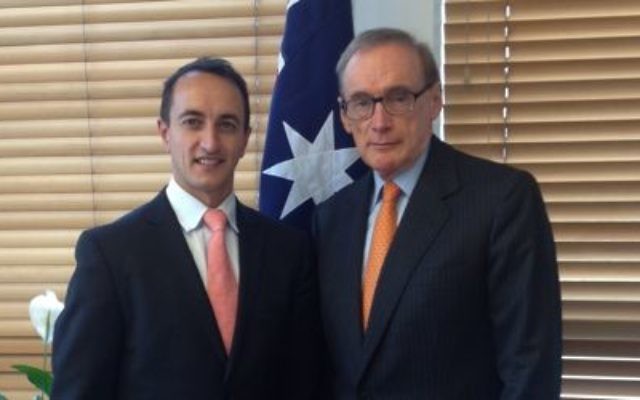 AUSTRALIA’s next Ambassador to Israel hopes to change what he says is “a bit of a one-dimensional impression” of Israel among the wider Australian public.

Foreign Minister Bob Carr announced on Tuesday that senior career officer with the Department of Foreign Affairs and Trade (DFAT) Dave Sharma will replace Andrea Faulkner as ambassador in June.

Sharma, who will settle in Herzliya Pituach with his wife and three children, has held a variety of DFAT roles within Australia, the United States and Papua New Guinea and was an adviser to former foreign minister Alexander Downer.

“It’s a fabulous opportunity and I think it’s a great experience professionally and personally. My family is excited about moving to Israel and spending some time in that part of the world,” he told The AJN.

“Professionally, it’s obviously a comprehensive relationship with a lot of linkages at the government to government level, at the people to people level [and] between communities.

Sharma said he would like to give the many facets of the relationship between the two countries more prominence.

“There’s a lot of interesting ­cooperation happening in the science and technology spheres between Australia and Israel, there’s growing business and commercial interests, and a lot happening through arts and cultural exchanges,” he said.

“A lot of what we see, particularly in the Australian media, is really about conflict in the Middle East … and I think people as a result in Australia, the mainstream public has a bit of a one-dimensional impression of Israel.

“I’d like to try, to the extent I can, lend my support to showcase some of the more interesting parts of what’s going on in terms of the relationship and how it works for both of us, and then give a more rounded impression of the nature of today’s Israel and Australia’s relationship with it.”

Faulkner has been Australian Ambassador to Israel since March 2010. Her time in office has spanned the passport affair of that year and more recently the Ben Zygier case.