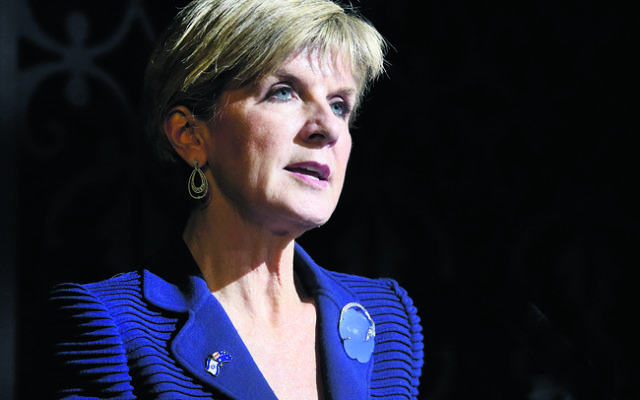 THE Jewish community has cautiously welcomed a landmark announcement by the Australian government ending direct aid to the Palestinian Authority (PA) through the World Bank, amid growing concerns that Australia’s tax dollars may be helping to fund terrorism.

The decision was triggered by concerns that Australia’s contribution towards the PA frees up funds within the PA budget used to finance the so-called ‘pay to slay’ Martyrs Fund – stipends paid to the families of terrorists killed or injured in attacks or imprisoned in Israel.

Bishop said: “I am confident that previous Australian funding to the PA through the World Bank has been used as intended. However, I am concerned that in providing funds for this aspect of the PA’s operations, there is an opportunity for it to use its own budget to [fund] activities that Australia would never support.

“Any assistance provided by the Palestine Liberation Organisation to those convicted of politically motivated violence is an affront to Australian values, and undermines the prospect of meaningful peace between Israel and the Palestinians.”

But Bishop said her government “remains committed to supporting vulnerable Palestinians with access to basic services”.

The Canberra move came in the same week that Israel passed a law to deduct taxes it collects for the PA to offset any PA payments to terrorists.

It also came just days after a report in Sydney’s Daily Telegraph that the MA’AN Development Centre, a Palestinian organisation receiving Australian aid through Union Aid Abroad-APHEDA, an Australia trade-unions charity, employed Ahmed Abdullah Al Adine, a senior figure in the Popular Front for the Liberation of Palestine, which has a decades-long record of terrorism.

Al Adine was killed in May during rioting at Israel’s Gaza border.

Executive Council of Australian Jewry co-CEO Peter Wertheim welcomed Bishop’s announcement but cautioned, “It would actually make matters worse if this reallocated Australian aid money freed up funds of Hamas to use against Israel in making rockets and building terror tunnels.

“We trust that the government will ensure that cannot happen, and that Australian aid money will be applied directly only to projects that the PA or Hamas would not otherwise have to fund themselves, and from which they derive no political benefit.”

Zionist Federation of Australia president Danny Lamm described Bishop’s decision as “a strong sign that the government is taking this issue very seriously and will take immediate action when the situation arises”.

Australia/Israel & Jewish Affairs Council executive director Colin Rubenstein saw Bishop’s move as “a sensible and prudent step to ensure that Australian taxpayer funds are not misused, and do not inadvertently facilitate Palestinian terrorism”, but urged “close and constant scrutiny”.

Bishop’s announcement drew praise in Israel, with Arnold Roth, whose Australian-born daughter Malki was murdered by Palestinian terrorists in 2000, describing it as “completely justified”.

Shurat Hadin, an Israeli organisation which mounts legal challenges to cut financing for terrorism, hailed Australia as “a lighthouse which hopefully other countries will follow”.