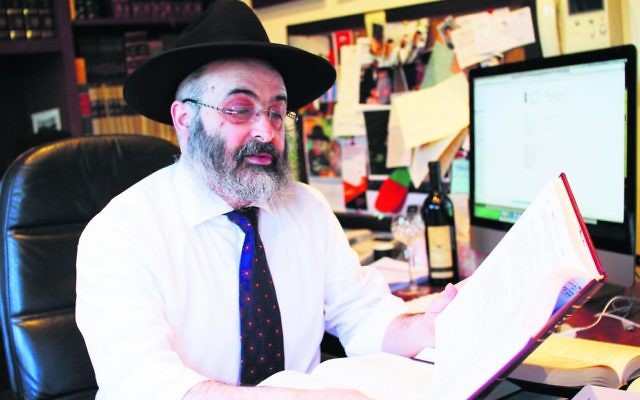 THE Adass Israel School in Melbourne has come under fire after appointing Rabbi Meir Shlomo Kluwgant as its new principal.

Rabbi Kluwgant, the former president of the Rabbinical Council of Australasia, was forced to step down from all his communal leadership positions after the 2015 Royal Commission into Instutional responses to Child Sexual Abuse.

While there has never been any claim or implication that Rabbi Kluwgant acted inappropriately with children himself, concerns were raised by victims and victims’ advocates over how he handled issues related to child sexual abuse.

Reacting to the appointment, Dassi Erlich, who was awarded more than $1 million in damages in a civil case by the Victorian Supreme Court for sexual abuse by former Adass principal Malka Leifer, said the school should learn from the past.

Leifer fled to Israel in 2008, aided by members of the Adass community, when allegations of abuse first surfaced.

“I implore you, please do not make the mistake of hiring Rabbi Kluwgant,” Erlich said.

“When you hire a principal it is not merely an administrative matter, it is a statement of your moral code as a community.”

Erlich wrote in an open letter to the Adass board that she believes the culture of silence within Adass hasn’t changed.

“Is it your intention to make it that much harder for the already terrified victims to come forward, with this additional hurdle to overcome?

“My heart goes out to the silent survivors of Leifer.”

Victims support and advocacy group Tzedek was contacted by Adass prior to Rabbi Kluwgant’s appointment. “We were very clear that we did not support this decision at this time due to the harm he had caused to survivors and their families,” Tzedek said.

“We did recommend however that Rabbi Kluwgant might seek to participate in a restorative process.”

Manny Waks, who founded Tzedek and was the first Jewish victim to publicly reveal his abuse, said the appointment was “outrageous and offensive”.

“This individual, who has caused immense pain and suffering to victims and their families – and brought the entire Jewish community into disrepute – has now been entrusted with the education and welfare of the children of Adass,” Waks said.

“Indeed, it is a slap in the face to the entire Jewish community. And it reinforces the perception that Adass does not take the issue of child sexual abuse seriously.”

Waks called on governments to cease “funding to Adass until they demonstrate that they take the issue of child sexual abuse seriously”.

An Adass spokesperson told The AJN that child safety remains a key priority.

“Adass will always ensure that our students are nurtured in a safe and protected environment.

“The board has every confidence that this appointment is in the best interests of the school community, and that Rabbi Kluwgant will be a tremendous asset.”

In the wake of the outcry, senior Adass rabbi Rabbi Avrohom Zvi Beck this week called for a general meeting to discuss Rabbi Kluwgant’s appointment. There is conjecture as to whether the meeting is to calm parents and the community, or to reconsider the appointment.

In an exclusive interview with The AJN, Rabbi Kluwgant said that his appointment was made “with Rabbi Beck’s express approval” and that Rabbi Beck has “more than once expressed his full endorsement”.

Referring to a text he sent AJN editor Zeddy Lawrence which was leaked to the Royal Commission in which he described Waks’s father as “a lunatic”, Rabbi Kluwgant said  “Any allegations beyond the highly regrettable text that was referred to in the Royal Commission, which led to me resigning my professional and communal positions in 2015 are utterly baseless.”