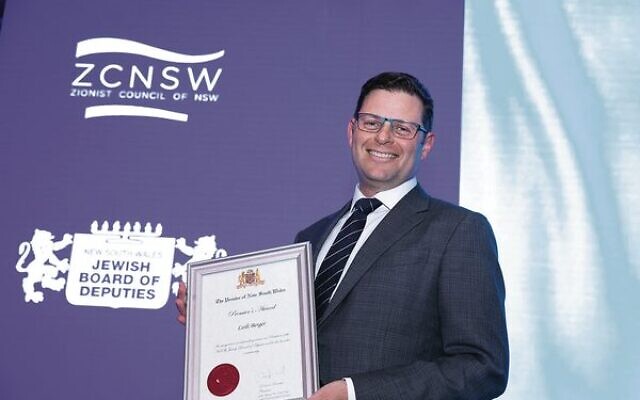 OUTGOING NSW Jewish Board of Deputies president Lesli Berger was honoured at the organisation’s AGM on Tuesday night for his four-and-a-half years of service leading the community.

During his time as president Berger and the JBD successfully urged the NSW government to endorse the IHRA working definition of antisemitism and to ban the public display of Nazi symbols; they were granted an exemption for the community to celebrate Rosh Hashanah and Yom Kippur in a COVID-safe manner; and held a rally for peace and solidarity with the State of Israel during the Gaza conflict which was widely attended.

Berger and the JBD also undertook a vaccine campaign to encourage members of the Jewish community and other ethnic and faith groups to get vaccinated against COVID-19.

Other achievements included successfully advocating for the NSW Labor Conference to adopt the IHRA definition of antisemitism and reject the boycott, divestment and sanctions (BDS) campaign, and mounting a counter-campaign to fight the BDS movement’s recent boycott of the Sydney Festival.

In May, Berger was presented with a distinguished Premier’s Award by Dominic Perrottet at the annual Yom Ha’atzmaut cocktail reception for his service to the Jewish and broader community.

“The work of the board continues and the need for strong advocacy, leadership and building relations with civil society and other ethnic and religious communities has never been greater,” Berger told The AJN this week.

“We are in very safe hands with David Ossip as the incoming president and I wish David every success and vow to support him and the board in whatever capacity that best serves the community.”