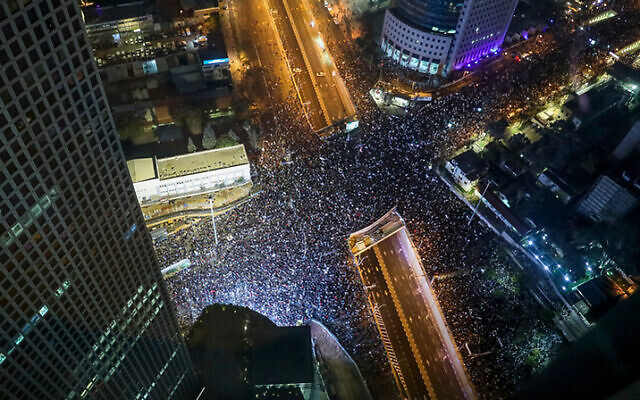 Critics of the new government’s proposals for radical reforms to Israel’s judicial system gathered Saturday night to protest for a third consecutive weekend, with a major rally in Tel Aviv and smaller events in other cities.

Police estimated that some 110,000 people gathered on Tel Aviv’s Kaplan Street and at Habima Square, making it the largest protest yet. Organizers assessed turnout at some 150,000.

Thousands more rallied in towns across the country, including in Jerusalem, Haifa, Beersheba, Herzliya and Modi’in.

Many roads in central Tel Aviv were blocked due to the demonstration, and police forces were out in large numbers to maintain order.

Rally-goers are protesting Justice Minister Yariv Levin’s proposals to drastically weaken the judiciary by severely curbing the High Court of Justice’s judicial review powers and cementing political control over the appointment of judges.

One of the demonstration’s central organizers, the Movement for Quality Government in Israel, said it was acting “against the dangerous revolution that the new government is planning to advance, a revolution that will destroy Israeli democracy.”

As rallies were held, the head of the Knesset’s Constitution, Law, and Justice Committee was reportedly ready to accelerate work on Levin’s legislation. According to Channel 12 news, a private proposal drawn up by MK Simcha Rothman of the far-right Religious Zionism party will be presented to lawmakers for discussion Sunday. Levin’s proposal is still being processed, and the two will likely be merged at some point.

Channel 12 said Netanyahu’s coalition wants a first reading of the bill in the Knesset by February 1.

Arriving at the protest after suffering criticism for skipping last week’s event, opposition leader and former prime minister Yair Lapid told reporters: “What you see here today is a demonstration in support of the country… People who love the country have come here today to defend its democracy, to defend its courts, to defend the idea of coexistence and of the common good.”

“We will not give up until we win,” he added.