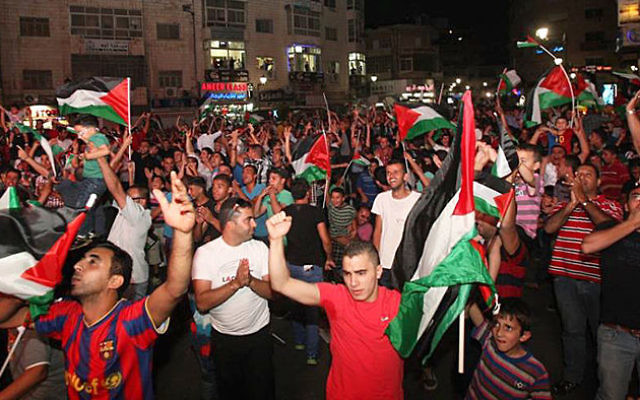 WATCHING Pitch Battle, which chronicled the journey of the Palestine football team to the 2015 Asian Cup in Australia, I was reminded of a meeting I had in Canberra a year ago.

It was with a federal politician who had met with a prominent Australian pro-Palestinian lobby group a few weeks earlier.

I know why that conversation ran through my mind as I watched Pitch Battle. Just like the characters profiled in the documentary, these lobbyists present a facade of tolerance and moderation but believe in something violent, destructive and inhumane.

But scratch at the veneer ever so slightly, draw out their true feelings with a few open questions and you have them defending a terrorist organisation and denying the right of the Jewish people to a national home in their historic land.

Amr Hannoun, the football team’s media officer, illustrates this perfectly. Equally endearing with his jovial disposition and radiant smile, he takes the sun on Sydney Harbour.

But soon Hannoun reveals his true nature. He defends suicide bombings against Israeli civilians. “We have to kill them,” he flashes. The veneer cracks.

Later, Hannoun is filmed in the Canberra countryside. Just a few kilometres from the place where the Palestine lobby group implored the politician to see the humane side of Hamas and denied Israel’s basic ­legitimacy.

Hannoun’s face is warm and charming once more. He gently ribs his mate for refusing to eat kangaroo. He hops around mimicking a gazelle. They remind me of a comedy duo. The straight man and the gregarious, loveable larrikin.

You quickly forget his earlier statements. Then a curious twist.

Standing there amid the picturesque gentle slopes and green-brown valleys, perfect Australiana, Hannoun is told that the cameraman is Israeli. The warmth dissipates. The Israeli cameraman looks uneasy.

He was there to do a job but is now propelled into an uncomfortable conversation. “What is the solution?” he nervously asks the Palestinians.

“We need our land back from the river to the sea,” Hannoun insists. He says it as though they’re arguing over a parking space or a table in a cafe. The significance of demanding “the river to the sea” is eminently clear. He demands all of the land from the Jordan River to the Mediterranean Sea. The annihilation of Israel. No Jewish State in any borders.

The other leading man in the film is the head of the Palestinian Football Association Jibril Rajoub. The narrator notes that “whenever the team travels Jibril Rajoub is there to punch home the political message.”

We see him coaching the players, not about how to hit the top corner of the net, but rather to politicise the game and extract maximum sympathy for the Palestinian cause from western reporters.

Under Rajoub’s patriarchal gaze, the players tell the assembled journalists their personal stories of suffering at the hands of the Israelis. “The occupation” is inserted into every interview.

They lay the foundations and then Rajoub steps in. FIFA must expel Israel, he tells the media. Just like the Asian confederacy expelled Israel back in 1974. Israelis mustn’t be allowed to play football with other countries.

Dan Goldberg, the Haaretz journalist and former editor of this paper, who produced the film, has told the story of a team of plucky underdogs, fighting against formidable foes. The plight of the team is intended as an allegory of the struggles of the Palestinian people.

But in reality, rather than presenting the team through the prism of the conflict, Goldberg reveals the crux of the conflict and the failure of the Palestinian national movement through the words and experiences of the team. It is not enough for the Palestinians to achieve full-member status in FIFA and play on the world stage. They demand Israel’s expulsion. It is not enough for Hannoun to crave a national home for his people. He demands every scrap of earth between the river and the sea.

The Palestinian cause enjoys broad public support but fails again and again to achieve its goals. This is because it is predicated on destruction rather than creation, on denying the rights of others rather than establishing rights for themselves, and, as Hannoun demonstrated, given the opportunity, it will even defend the indefensible – the deliberate killing of the innocent.

Goldberg tried to show us the compelling tale of an underdog, but his characters were too honest in their hatred to hold our sympathy.

Alex Ryvchin is the public affairs director of the Executive Council of Australian Jewry.