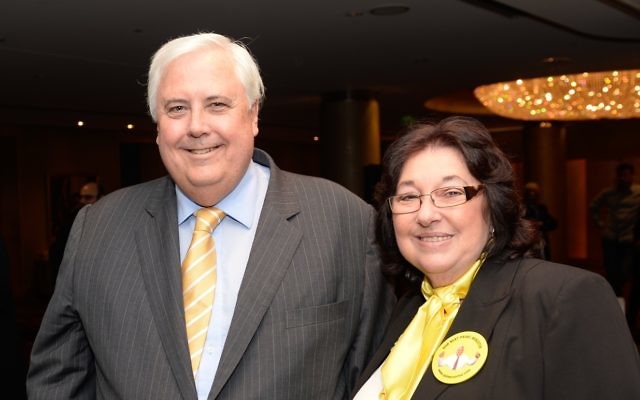 Palmer made the remark to the ABC in response to Newman saying he was surprised the businessman-turned-politician had not yet been investigated for using Chinese funds designated for operating a port on his election campaign.

Asked to clarify the use of the word by journalists outside Parliament House later on Monday, Palmer said: “Of course he’s a Nazi. He wants to use the Gestapo, you know. Look at his popularity. He’s just below [where] Hitler was when he got elected.”

“Hitler’s evil actions led to the mass murder of six million Jews and millions of others and have no parallel in history,” he said.

“Invoking his name for personal attacks does a great disservice to history and is an insult to the memory of those who perished at the hands of the Nazis and those who survived.

“We urge Clive Palmer to apologise for his horrendously insensitive statement and to refrain from using such analogies in the future.”

Queensland Jewish Board of Deputies president Jason Steinberg said the comments were distasteful and “trivialise the Nazi regime”.

“Any comparison of any politician or figure in Queensland society, any reference to them in terms of the Nazi regime is abhorrent,” he said.

Executive Council of Australian Jewry president Robert Goot said: “Without commenting on the dispute between Mr Palmer and Mr Newman, Mr Palmer’s description in that context of the use of ‘Nazi’ and ‘Gestapo’ tactics was entirely inappropriate and succeeds only in trivialising the crimes of a genocidal regime.

“He has every right to make his point, but there are more appropriate ways to do so.”

But Foxman, who is now involved in setting up the NSW branch of PUP, stood by Palmer. “Clive is a very colourful person and he uses colourful language,” she told The AJN.

“It’s a little heavy handed to say he [Newman] is a Nazi, but there’s a lot of people up in Queensland who are suffering because of him.

“He may be using Gestapo tactics but he hasn’t killed anyone we’re aware of.”