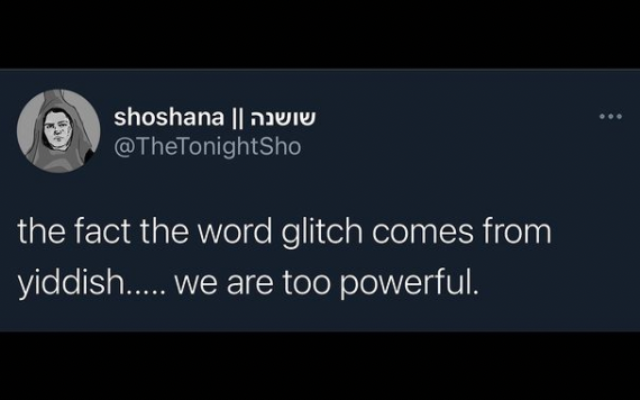 When you look through Shoshana Gottlieb’s Instagram page, Jewish Memes Only, chances are you’ll have a little giggle. In today’s world, which can sometimes be very depressing and riddled with antisemitism, there’s something special about seeing Orthodox Judaism painted in a positive and fun light, bringing the beauty of the religion to the masses.

Gottlieb uses memes from shows such as Brooklyn Nine-Nine, The Simpsons and The Good Place and changes the text to relate to Judaism. These are sprinkled between quotes that she has written such as “technically, Mila Kunis’ bat mitzvah was a circumcision, a brit mila, if you will” or “thing that is not antisemitic but feels antisemitic … kitniyot”.

The Kesser Torah College graduate, who is now studying at The Pardes Institute in Israel, says she has always had a knack for making people laugh.

Growing up in the 2000s, Gottlieb has spent a lot of her life online, so it was a natural progression for her to combine her deep appreciation for Judaism with social media, while also bringing some entertainment as well.

“I was posting online in smaller groups or sending things to my friends. Someone told me to make a page of it all to put it in one place,” Gottlieb said by phone from Israel.

“I genuinely thought it would be my friends and my mum following me.

“I think we’ve reached the point where people, especially young people, want something to be relatable to us.”

Jewish Memes Only now has more than 13,000 followers and it’s growing.

For Gottlieb, it’s about showing her experience with Orthodox Judaism.

“It’s not always this big drag, like shows like Unorthodox made it look. You have people rejecting everything about religion,” she said. “But my experience isn’t that. I want to celebrate it in a different way.”

Gottlieb acknowledges that what she’s doing can be risky, with backlash a real possibility, even from those within the Jewish community.

Although, she says that she does appreciate when people engage with her in a meaningful way, even if they disagree with what she’s saying.

“When people come to me and say, ‘I interpreted it this way’ or ‘that’s interesting but I think this’, that’s all in the spirit of the lively debate that the entire Jewish tradition is based on.”

Gottlieb said the latter far outweighs the bad experiences, with many people messaging her to ask for further explanation on a Talmudic commentary.

At the end of the day, Gottlieb wants to make sure that everyone knows that you can find your Jewish crew or your Jewish niche.

“There are fun, young, Jewish communities out there in the world. There are people who think the way you do.”

Jewish Memes Only is part of what helps Gottlieb appreciate and love her Orthodoxy within the secular world. And obviously, it’s helping others too.