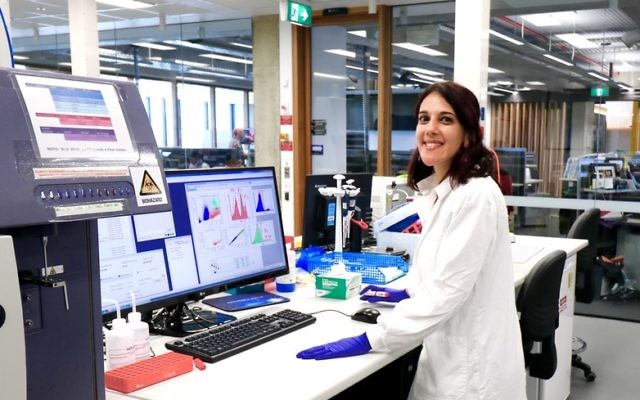 Dr Debbie Burnett, who conducts research into disorders of the immune system at the Garvan-Weizmann Centre for Cellular Genomics in Sydney.

THE potential to uncover cures and personalised treatments for cancer through advancements in genomic medicine was significantly boosted earlier this month when the partnership between Australia’s Garvan Institute of Medical Research and Israel’s Weizmann Institute of Science, forged in 2016, receiving its biggest individual donation.

Bob Magid, publisher of The AJN, donated $1 million to the partnership, which established the Garvan-Weizmann Centre for Cellular Genomics at the Kinghorn Cancer Centre in Sydney nine months ago.

Magid said genomic medicine was not a field he or his wife Ruth had focused on before, “but our daughter who lives in Israel has become very close with the Weizmann Institute there, so we decided to visit it, and we also recently received a tour of the new Garvan-Weizmann Centre in Sydney”.

“We left feeling very impressed by the researchers and the amazing work they are doing.

“The fact they can look at a person’s DNA – right down to the single cell level – and the potential that has for medical science, is amazing.”

“It’s the largest single gift since the major contributions of Jillian Segal and John Roth, Laurie and Di Sutton, and the Johnny Kahlbetzer family, which together made the Garvan-Weizmann Centre a reality,” he said.

“We’re absolutely blown away by their generosity and vision.

“It’s given the partnership – which is very wide-ranging – the freedom to select the best options for maximum impact, and it will make a tremendous difference in helping to understand major unsolved medical conditions.

“For 10 years we’ve dreamt about doing this type of genetic medicine at this level, and now it’s become a reality.”

Goodnow also said the timing of the donation is an added bonus, “because with the Garvan-Weizmann Centre about to turn one this August, it enables us to really accelerate its growth phase, and resource some wonderfully talented researchers from both organisations to work together on important projects, here and in Israel.”

Weizmann Australia chairman Stephen Chipkin described the Magid’s donation as “a gift to the world” because of the far-ranging impact of genomic medicine advancements.

“This funding of genomics research between these two great research institutes will not only help build a strong bridge between Australia and Israel – the medical research outcomes will be for the benefit of all humankind,” Chipkin said.

Segal said the donation “is a wonderful investment in our kids’ and grandkids’ future”.