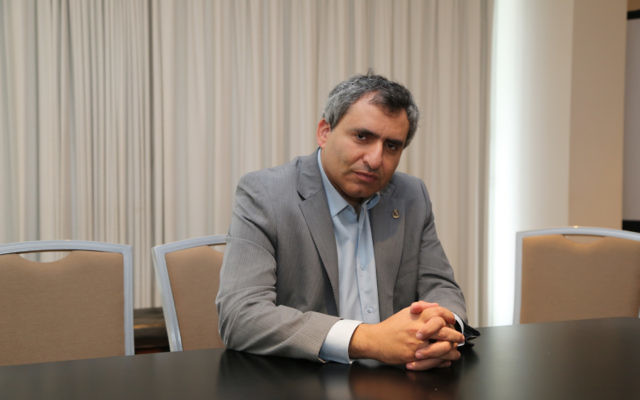 ISRAEL’S Minister of Environmental Protection Ze’ev Elkin visited Australia this week, meeting with state and federal MPs to try and establish deep cooperation between Israel and Australia in the field of environmental protection.

The Likud MK, who is also Minister of Jerusalem, met with Minister for the Environment and Energy Josh Frydenberg to learn more about Australia’s experience in the field of environmental protection, and to see where Israel can be helpful with its experience.

“In the field of water use and management we have wonderful achievements, better than the recent Australian situation … in the field of recycling of waste, Australia has better achievements than us, and we need to learn,” Elkin told The AJN.

“Australia is one of the leading countries in the field of environmental protection. The idea of cooperation between our countries in this field can be very fruitful.”

Frydenberg told The AJN he was “delighted” to welcome Elkin to Australia and “discuss opportunities for greater information exchange and cooperation” on renewable energy technology, and water and land management.

Elkin also met with Foreign Minister Julie Bishop and shadow foreign minister Penny Wong, noting it is “very important to keep high-level dialogue”, as well as with leaders of the Jewish community in Sydney and Canberra.

On the peace process between Israel and the Palestinians, Elkin told The AJN, “We are ready to speak with Palestinians any time, but without preconditions.

“If somebody is ready to come to the meeting, only if you are ready to pay for him, it obviously means that he is not interested in the dialogue itself.”

In February, then immigrant absorption minister, Elkin was personally invited by German Chancellor Angela Merkel to join her for talks with Prime Minister Benjamin Netanyahu.

“For them, the issue of immigration became very important and we come with our experience in the field of absorption, with many ideas and a lot of experience, of relatively successful absorption,” he said.

Noting there is a “big difference” between the Israeli situation and the recent German situation, Elkin said nonetheless many technical issues and tools that Israel used for many years “can be very useful for the German situation”.

In April, Elkin also accompanied Netanyahu to a meeting with Russian President Vladimir Putin to discuss the situation in Syria.

Stating that Israel is very active in the sky in the region, he said it is “very important” for Israel to try to prevent incidents, such as what happened late last year between Russia and Turkey.

“We need to keep the freedom of our activity in the sky in this area,” Elkin said.

As for Putin, Elkin noted he has a “very positive view and approach to the Jews and to Israel”, and “a good understanding about the security challenge that we need to face”.