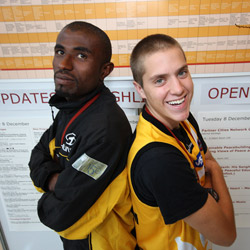 A DREAM of uniting Israelis and Palestinians through Aussie rules football continues to resonate throughout the world.

At the Parliament of the World’s Religions held in Melbourne this week, the co-captains of the 2008 Peres Peace Team, Yonatan Belik and Kamal Abualthom, told delegates about their experiences.

They shared the stage with executive director of the Peres Centre for Peace’s Australian chapter and founder of the concept, Tanya Oziel.

And they were joined by former AFL footballer and coach of the 2008 Peace Team Robert “Dipper” DiPierdomenico.

The group discussed sport as a medium for peace, with Oziel telling the The AJN she was “humbled” by the significance the project has had on so many lives.

“It’s spectacular that their story was so inspirational and had such an impact on whoever got in contact with it,” she said.

“I started this with one little idea and the ripple effect of how many lives it has changed is humbling. It shows that even if something seems a challenge, it is still worth trying.”

According to Oziel, “the project and the story keep living”, with the film about the team’s journey, Tackling Peace, nominated for best documentary at this weekend’s Australian Film Industry Awards.

Corporate sponsor Deloitte also held a dinner for 200 people, all keen to be involved with the next Peace Team in 2011.

The project has also led to bridge-building in the local community, with the AFL holding a multicultural football clinic for 80 youngsters led by Dipper, Belik and Abualthom this week.