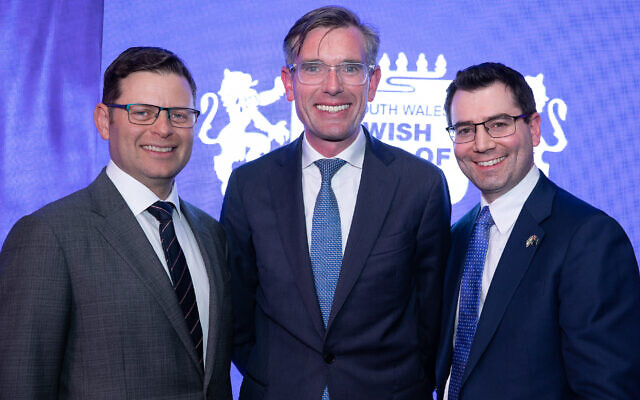 It comes after the Premier made a public admission on Thursday that he wore a Nazi costume at his 21st birthday party.

“The Jewish Board of Deputies had a constructive meeting with the Premier this afternoon, at the Sydney Jewish Museum,” Ossip and Bark said in a joint statement.

“During the meeting, we outlined to the Premier the hurt and offence to our community caused by his actions. The Premier expressed deep remorse and contrition for his past actions and underlined his commitment to Holocaust education and fighting rising levels of antisemitism.

“We look forward to working with the Premier to ensure that every student in NSW leaves school with an understanding of humanity’s darkest chapter and the universal lessons of the Holocaust.”

At a specially convened press conference on Turssday, Perrottet apologised for his “massive mistake”, saying “I’m not the person today that I was when I was 21” and he was “deeply ashamed” of his younger self’s actions.

There are rumours that a compromising photograph of Perrottet was set to be leaked ahead of the March 26 state election.

Ossip and Bark said in an earlier statement that they appreciated that Perrottet “personally reached out to the Jewish community this afternoon to express his deep and sincere regret about his poor choice of costume as a young man”.

“The Premier has been a staunch supporter and friend of the NSW Jewish community throughout his time in public life. In particular, as Treasurer, he ensured the Sydney Jewish Museum received funding to ensure that it could continue educating the community about the Holocaust and the horrors of the Nazi era,” they said.

But they said the incident, “no matter how old”, was a reminder of the need to “continually educate” all Australians – particularly youth – about “the abhorrent nature of the Nazi regime and the evil perpetrated in service of the Nazi ideology”.

“Nazi symbolism is not to be taken lightly and dressing as a Nazi is not a joke. It disrespects the millions of innocent civilians who were murdered during WWII, including six million Jews and thousands of Australian Diggers who died fighting against the Nazis,” Ossip and Bark said.

“The Premier has acknowledged this, recognising that wearing the costume was offensive and will distress many in our community. We hope that this unfortunate incident will serve as a lesson to all.”

Member for Vaucluse Gabrielle Upton said she was “profoundly disturbed” by the news that the Premier had worn a Nazi costume. “The display of Nazi symbolism in any form is totally abhorrent and has absolutely no place at all in our community,” she said.

“I acknowledge the deep offence and hurt this has caused our Jewish Community and Holocaust survivors. I know the Premier is a passionate supporter and friend of the NSW Jewish community and I acknowledge his sincere regret and apology.”