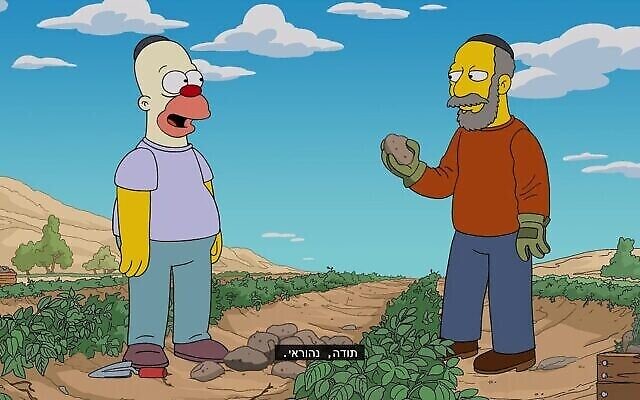 Homer Simpson speaks with an Israeli farmer named Nehorai in an episode of The Simpsons. Photo: Screenshot/20th Century Fox

An image of a kibbutz was a surprise feature in a recent episode of the popular US animated show The Simpsons.

Social media users noticed the visual toward the end of Season 33 Episode 20, quickly pointing out that it bore a striking resemblance to a popular image of Kibbutz Nir David, which lies in the Beit She’an valley in Israel’s north.

The scene depicts the kibbutz and the surrounding region with a subtitle “A Kibbutz in Israel,” before cutting to an exchange between Homer Simpson and a yarmulke-wearing Israeli farmer named Nehorai, Israel’s Channel 12 news reported.

Some users suggested that the kibbutz’s inclusion was due to the attention it garnered in 2021 amid legal disputes between members seeking to protect their gated community and Beit She’an residents who have long sought public access to the Hassi Stream which runs through it. 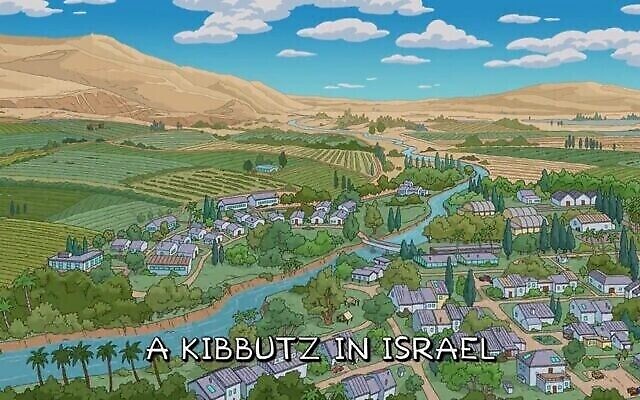 The popular US animated show The Simpsons features an image that looks like the northern Israel kibbutz Nir David. Photo: Screenshot/20th Century Fox

Residents of the northern city of Beit She’an, backed increasingly by social justice activists from all over the country, have battled for years to gain access to the turquoise stream, which is actually a canal.

The stream used to run through Beit She’an, but was diverted for agricultural and other uses in the 1980s, and has dried up.

One user found that when you do a Google search for “Kibbutz in Israel,” one of the first images returned is an aerial shot of Kibbutz Nir David — an almost identical image to the animation featured in The Simpsons.

The kibbutz scene joins the list of Israeli references throughout the 33 years of show, including Season 22 Episode 16 in which patriarch Homer brings the entire family on a pilgrimage to Israel, visiting the major holy sites under the guidance of a stereotypical Israeli tour guide.