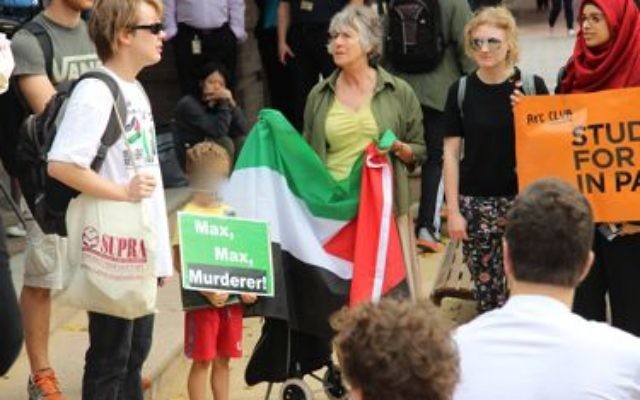 COMMUNAL leaders have reacted angrily at photos of a young child brandishing a sign labelling an Israeli business owner a “murderer”, during a Boycott, Divestment and Sanctions (BDS) protest on Tuesday.

The boy held a sign that read “Max, Max, Murderer!” during the demonstration, which targeted a soon-to-be-opened Max Brenner chocolate store at the University of New South Wales (UNSW) in Randwick.

“It is remarkable that ostensibly educated and intelligent people have so little insight into what they are doing,” Executive Council of Australian Jewry executive director Peter Wertheim said when he was shown the photo.

“They are raising a young child on myths and prejudice and planting the seeds of hatred with reckless disregard for the ultimate consequences. They have learnt nothing from history.”

His comments were echoed by NSW Jewish Board of Deputies president Yair Miller. “It is deplorable to see a young child being indoctrinated with falsehoods and hatred,” Miller said.

More than 2000 people were invited to the BDS protest on Facebook, but less than 40 people showed up.

The Facebook page itself attracted a slew of anti-Semitic comments, among them one describing Jews as “evil”, “greedy” and “money-loving”.

Speaking ahead of Tuesday’s protest and in the wake of the recent vote by the University of Sydney’s Student Representative Council calling for ties to be cut with the Technion- Israel Institute of Technology, Prime Minister Julia Gillard stated that the Australian government has always been firm and clear in its opposition to the BDS campaign.

“This campaign does not serve the cause of peace and diplomacy for agreement on a two-state solution between Israel and Palestine,” Gillard said.

“I welcome the strong ties our universities have with Israeli researchers and academic institutions, and I hope those ties will deepen in the years ahead.”

Shadow minister for climate action, environment and heritage Greg Hunt, who spoke at the Australia/Israel Chamber of Commerce in Melbourne this week, said the BDS movement on campus was being led by a “group of ­leftist students at the University of NSW and Sydney University [who] are completely out of ­control”.

“Anti-Semitism is religious racism. This is unacceptable and they should acknowledge that they are motivated by collective bigotry regarding their comments on Israel and their apparent willingness to tolerate the most extreme and anti-Semitic comments on their website.”

A spokeswoman for UNSW said the university has no plans to change the agreement with Max Brenner and the store will open, as planned, by June.