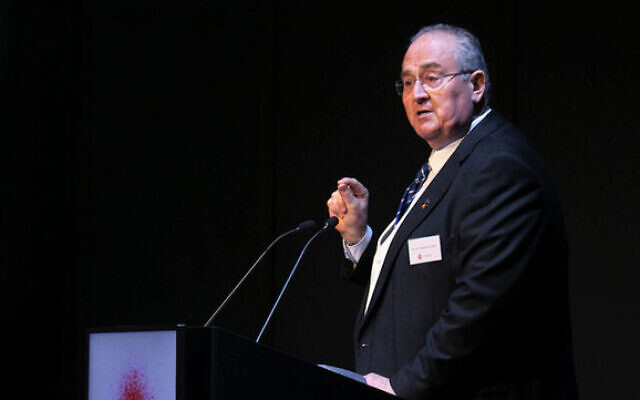 FORMER NSW Labor frontbencher Walt Secord thanked the Jewish community and pledged to continue to confront antisemitism during his valedictory speech in the NSW Parliament.

Secord, a staunch friend of the Jewish community and the deputy chair of the NSW Parliamentary Friends of Israel, will be retiring from politics in March after more than 30 years.

Secord stepped down from the shadow ministry in August after he was accused of bullying, and he used his speech to address the “two forces” that conspired to bring him down. “Those cliques are comprised mainly of disgruntled supporters of the former Labor leader and a pocket of vicious anti-Israel actors,” Secord said.

“In the support of Israel I have gone head to head with those in my own party who want to see the destruction of the Jewish State. I fought the vile and antisemitic boycott, divestment and sanctions … against Israel and I fought for the IHRA definition of antisemitism. As a strong supporter of Israel and the Jewish community, and now a Jew myself, it would be shameful of me to … do and say nothing.”

Secord said the “random allegation” from a former staff member that he had banned discussion of a two-state solution between Israel and the Palestinians “was a blatant lie”, while other colleagues claimed he was “too forceful” in a meeting in defence of Israel against a BDS motion.

“It was also suggested that I was conflicted as a Jew and a Zionist,” Secord said. “For the record, I am proudly both.”

Secord also expressed disappointment that he and former premier Bob Carr are now so distant.

“I worked as his director of communications for 10 years.

“Today, we are polar opposites on Israel and the Middle East because of his harsh criticisms of Israel and his attacks on what he calls ‘the lobby’. He often forgets that Israel is the only democracy in the Middle East. The Jewish community and I are dismayed and deeply upset by his words and actions,” Secord said.

He described his tough childhood growing up on an Indian reserve in Canada, where a Holocaust survivor became his mentor and “changed and shaped my life”.

In 1988 he moved to Australia and worked for The AJN “for three weeks before they realised that I was not Jewish yet”. Secord converted to Judaism two years ago.

He thanked Emanuel Synagogue and Rabbi Mendel Kastel for their support, as well as the NSW Jewish Board of Deputies, and said he was proud to have been associated with Shalom Gamarada, a partnership between the Jewish and Aboriginal communities.

“I will step away at the March 2023 state election but I will maintain my links to Labor and the Jewish community,” Secord said. “I also pledge to continue to oppose and confront antisemitism and anti-Israel activities in all forms.”