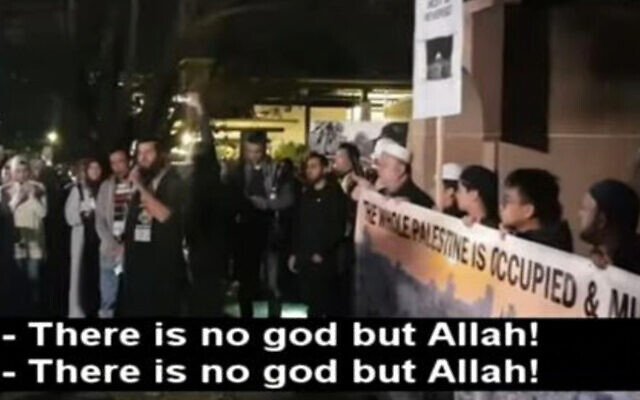 A screenshot from the video.

NSW Police has confirmed to a state parliament hearing that the latest video of a hate-filled rally held by Islamist group Hizb ut-Tahrir is being investigated.

In the video that emerged last month of the rally held in May during Israel’s conflict with Hamas, the crowd reportedly chanted in Arabic “Destroy the Jews!”,”Khaybar, Khaybar, o Jews! The army of Muhammad will return,” (a reference to a seventh-century massacre of Jews by Muslim forces), and a speaker said, “O Allah, give us the necks of the Jews!”

It was translated by the Middle East Media Research Institute (MEMRI) and subsequently referred to the police by the NSW Jewish Board of Deputies (JBOD).

“It’s subsequently been allocated to the Fixated Persons Unit for investigation,” he said in response to questioning by Shadow Minister for Police and Counter Terrorism, Walt Secord.

He added that Muslim community members “have denounced” the rally and Hizb ut-Tahrir was “not well regarded” by the mainstream Islamic leadership.

A video of a 2017 rally, released last year, has also been investigated by police and referred to the Director of Public Prosecutions for potential legal action under NSW’s new anti-incitement laws, which were introduced in 2018 following the JBOD-led “Keep NSW Safe” campaign.

“This most recent incident is one of many in a long line. It is a pattern of hatred,” said JBOD CEO Darren Bark.

“Those who repeatedly call for violence against Jews should be dealt with before their words manifest into the type of violence they are calling for.”

In the wake of the video, the Hindu Council of Australia said it “stands with the Jewish community and condemns the hate speech … during a protest in the month of May 2021”.

The Armenian National Committee of Australia said, “As fellow descendants of genocide survivors, the ultimate act of racial and religious intolerance, Armenian-Australians stand with Jewish-Australians in declaring that words matter.”

The Assyrian National Council of Australia said that antisemitism, “The world’s oldest disease, has no place in our way of life.”

But while Home Affairs Minister Karen Andrews last month “utterly condemned this offensive and hateful antisemitic rhetoric”, Hizb ut-Tahrir – which is banned in many countries – remains free to operate in Australia.

“Hizb ut-Tahrir is banned in Indonesia, Turkey, Egypt and Germany – but not Australia; that is mind boggling,” Secord said.

Executive Council of Australian Jewry co-CEO Peter Wertheim said the roof body would welcome an investigation into whether Hizb ut-Tahrir meets the legal requirements for proscription as a terrorist organisation.

But if it is found to fall short, he said the government needs to “undertake an immediate review of the current Commonwealth Criminal Code, which supposedly makes it an offence to incite violence on the basis of race or religion”.

“The relevant provisions have thus far failed completely to hold Hizb ut-Tahrir to account for its blood-curdling preaching of antisemitic hatred and violence,” he said.

Meanwhile Australian Jewish Association president David Adler told The AJN a complaint made by his advocacy organisation to the Australian Human Rights Commission under Section 18C of the federal Racial Discrimination Act over the rally and video has been accepted as valid and is being investigated.