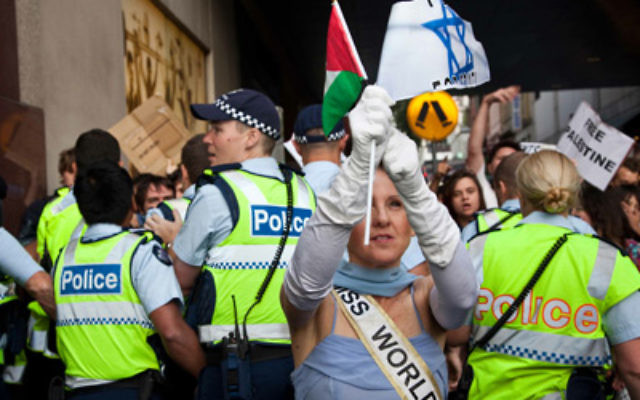 CONCERN is rising in the Jewish community over increasingly violent anti-Israel protests in Melbourne.

Earlier this month, around 100 protesters marched through Melbourne’s CBD targeting Jericho cosmetics stores and Max Brenner cafes. It was part of the Boycott, Divestment and Sanctions (BDS) movement, being pushed by pro-Palestinian groups.

Jewish artist Jane Korman, who attended the April 1 protest, said the protesters – who she described as Anglo-Saxon and mostly university aged – were “quite abusive”. She also painted demonstrators as “hostile”, and “screaming a lot”.

“The police were working quite hard to protect the shops which the crowd was trying to attack,” she said.

There was a small group of young Zionist counter-protesters at the demonstration, but Korman said police warned them to leave after the level of animosity escalated.

Despite having a policy of not commenting publicly on anti-Israel protests in a bid to reduce the amount of publicity they receive, the Jewish Community Council of Victoria (JCCV) and the Community Security Group have made representations to senior Victoria Police officers.

Speaking at Monday night’s JCCV plenum, president John Searle called on the police to stamp down harder on aggressive protesters. “There should not be blatant breaches of laws that are overlooked by the police or flagrantly ignored by the police.”

A spokesperson for Victoria Police confirmed the force was aware of the anti-Israel protests and responded in the same way to all demonstrations, based on assessments of the situation.

Korman, who tried to make a statement by attending the protest dressed as “Miss World Peace”, carried both an Israeli and a Palestinian flag in a bid to highlight the danger of indifference. But she said her message did not seem to get through to the protesters, who ripped her Israeli flag.

“I thought there needs to be a different perspective. These protests are so full of hatred and vitriol,” she said.

Searle said he was not encouraging Israel supporters to organise counter-protests, saying this would increase the likelihood of violence.