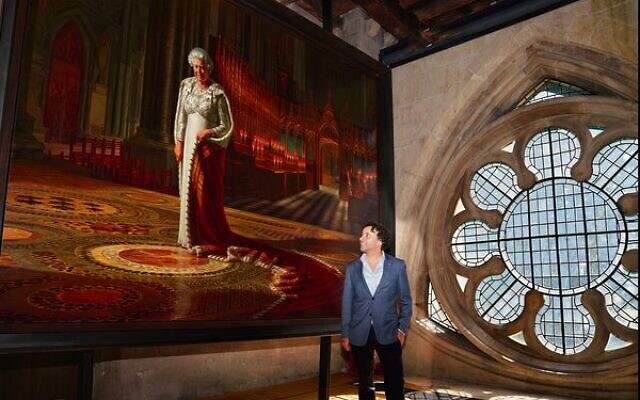 While many Jewish Australians were moved by the news of Queen Elizabeth’s passing, Ralph Heimans felt it more personally than most.

The acclaimed portrait artist, who is based in London, had the honour of painting Her Majesty in 2012 for her Diamond Jubilee, an experience he described as “life changing” and “a once in a lifetime opportunity”.

Heimans spent an hour in the monarch’s company at Buckingham Palace, taking photos to use as reference for the painting.

The resulting artwork, The Coronation Theatre, depicts the Queen standing in the exact spot in Westminster Abbey where she was crowned in 1952.

“She really has an extraordinary presence and real grace. When I met her, I was really struck by her humility as well,” he told The AJN this week while visiting Australia.

“On a personal level, she was just an extraordinary woman and quite relatable and yet there was that sense, of course, that she was still the monarch.”

He recalled her wearing the robe of state and jewels worn by Queen Victoria.

“There was certainly a lot of theatre involved in the meeting itself and the sitting. It really was, as you would imagine meeting the Queen, an extraordinary opportunity and encounter.”

He described painting the work as an “extraordinarily intense period of my life, to put it plainly”.

“My entire year was devoted to thinking about the Queen and representing her in the best possible way,” he said.

“It’s been the principal work in my career. So I feel very, very connected to the Queen in many ways. So [her passing] did impact me in a very personal way.” 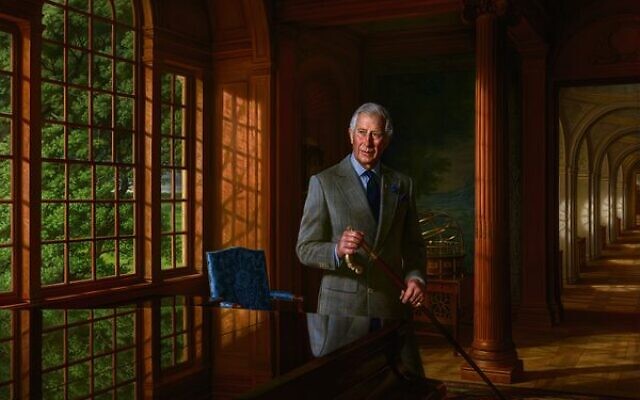 Over the last 10 years, Heimans said, the portrait has taken on “a life of its own”.

“It’s had various chapters already. It was unveiled at the National Portrait Gallery of Australia during the Diamond Jubilee celebrations, then it went back to the UK where it took its place in Westminster Abbey,” he said.

“It was vandalised in the Abbey in quite extraordinary circumstances. So that was another chapter that the painting went through, [being] fully restored.”

With the Queen’s passing, he said the painting “seems to have a different resonance”.

“The theme of the work was the coronation, the moment that she was crowned,” he said.

“Now it’s equally relevant because the coronation is about the passing of the crown from one monarch to the next. It’s about the movement of history, and the spot where she’s represented, is the very spot where for 900 years, every monarch has been crowned.

“So it has a particularly poignant resonance for this moment.”

Commenting on the sadness of her passing, he said, “We all expected her to keep battling on because that’s all we know. She’s always been a part of our lives.

“She has been one of those extraordinary rare figures, possibly the only public figure in our lives that has been a constant, so it’s hard to imagine her not being there.”

Heimans’ ties to royal history are still being written, his 2017 portrait of Prince Philip serving as a backdrop as the newly crowned King Charles III signed his oath.

He also painted the then Prince Charles on the occasion of his 70th birthday in 2018.

“That was an incredible opportunity as well. It’s great to have done that and to represent him before becoming king,” Heimans said.

“It’s a painting very much devoted to his interests, passions and causes … it’s a work that really does focus on his civilian life and all the efforts of his charities.”

He described the King as “a remarkable man”.

“He really is extremely erudite. He’s wise. He comes to the role with a lot of preparation and wisdom,” he said.

“And his causes resonate with me personally.

“He has been extraordinarily visionary in his commitment to the environment for 50 years. Interfaith dialogue is a very big part of his core practices and beliefs.

“And I think he’s got some extraordinary ideas that really have stood the test of time, basically. I think he’ll be a great king.”