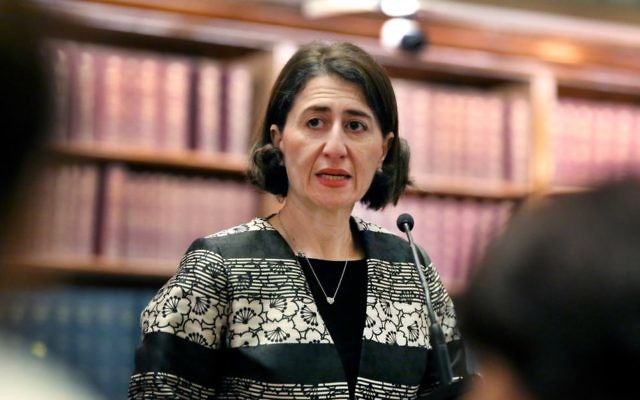 AS the granddaughter of survivors of genocide, it was a poignant moment when NSW Premier Gladys Berejiklian addressed the multicultural media on Tuesday and declared that Holocaust education is “absolutely critical”.

Speaking to journalists at Parliament House, along with Minister for Multiculturalism Ray Williams, it was the first time Berejiklian had come face to face with multicultural media organisations, including The AJN, since assuming the state’s top job in January.

She spoke candidly about a multitude of topics, including her recent meeting with Israeli Prime Minister Benjamin Netanyahu, as well as her upbringing in a migrant family.

When she started school she didn’t speak any English, but quickly picked it up.

“My parents always said to me, ‘Be a good citizen, be a good Australian but don’t forget your heritage and be proud of your heritage,’” she recalled.

“That’s something that has stuck with me all of my life.”

Asked about her meeting last month with Netanyahu, Berejiklian said it was a “wonderful privilege”.

“We were really excited to have the exchanges we have in relation to young entrepreneurs visiting Israel and learning about start-ups and similarly Israel was very interested in our financial services sector, and how developed that is,” she said. “Clearly we have a lot to cooperate with.”

On the topic of Section 20D of the NSW Anti-Discrimination Act, which a number of community groups in NSW are arguing is “weak and ineffective” and urging the state government to fix, Berejiklian noted it is “under consideration”.

“We don’t have any concrete plans at this stage but we do appreciate the concerns raised by your community and others about that.”

Asked by The AJN about the importance of Shoah education, Berejiklian replied, “Holocaust education is absolutely critical.

“I’m the granddaughter of survivors of genocide so I appreciate the importance of that.

“So many communities around the world continue to suffer because not enough was done at the time to deny and to prevent those human tragedies.”

Stating, “You can’t put into words what the victims of the Holocaust or genocide have experienced,” she added, “I’m a strong believer that denial and lack of action by global communities allows perpetrators to keep doing these things.

“Unfortunately there are always instances around the globe. All of us can be more vigilant in speaking up and doing more.”