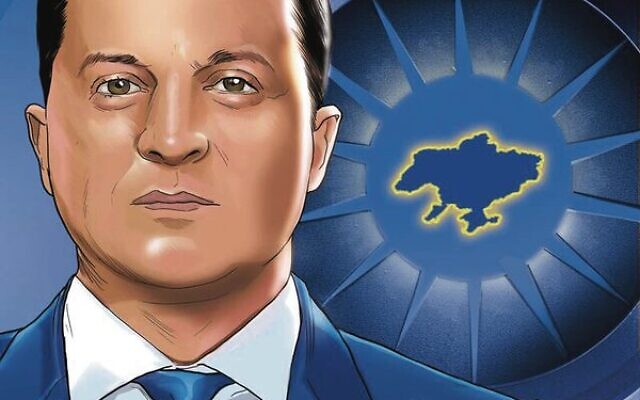 Ukrainian President Volodymyr Zelensky has joined the ranks of superheroes in tight underwear and infeasibly large capes – he has become a comic strip hero.

Zelensky’s journey from comedian to heroic wartime leader has been given the graphic novel treatment in TidalWave Comics’ latest biography, Political Power: Volodymyr Zelensky, which tells the story of how Zelensky swept to power in 2019 promising to end a war with Moscow-backed separatists in eastern Ukraine.

Now the comic has become a comic-book icon.

The graphic novel tells the story of the Ukrainian leader until February 24, when Russia’s offensive in Ukraine began.

The book shows Zelensky kneeling in front of a grave of a family member – in an army uniform. “This is a story about a family of four brothers,” Zelensky is quoted saying. “Three of them, their parents and their families became victims of the Holocaust. All of them were shot by German occupiers who invaded Ukraine.

“More than a million Jewish Ukrainians were killed during the Holocaust.

“The fourth brother survived after the war. Two years after the war, he had a son and in 31 years, he had a grandson,” fictional Zelensky tells readers.

“In 40 more years, that grandson became president, and he is standing before you today, Mr Prime Minister,” Zelensky says. “Your nationality, your religion, your age, your sex, your place of birth have no meaning when there’s the kind of word and heart that moves you inside against the total evil you stand against.”