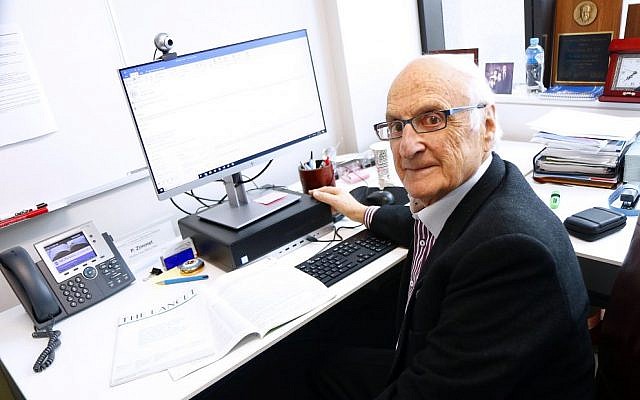 Professor Paul Zimmet at his desk at the Alfred Centre in Melbourne. Photo: Peter Haskin

THOUSANDS of physicians and health academics across the world, led by among others Australian Jewish Professor Paul Zimmet, have ended a five-year boycott of leading international medical journal The Lancet over its coverage of Israel.

Tensions erupted in 2014 after Operation Protective Edge, the Israel–Gaza war, when The Lancet‘s editor-in-chief Professor Richard Horton published an inflammatory letter blaming the Jewish State for the conflict. Signed by 24 doctors and scientists, it spoke of “the aggression of Gaza by Israel” and said Israeli academics “are complicit in the massacre and destruction of Gaza”, while claiming Gazans were trying “to resolve their conflicts without arms and harm”.

Among the letter’s principal authors were Drs Paola Manduca of Italy and Swee Ang of Singapore who had previously circulated material by Ku Klux Klan leader David Duke. Manduca had also forwarded a piece suggesting Jews were responsible for the Boston Marathon bombings.

Zimmet, who is professor of diabetes research at Monash University, quit The Lancet‘s international advisory board in protest, and when a worldwide petition by Jewish and non-Jewish Israel supporters failed to persuade the journal to retract the article, he joined health specialists in the US and elsewhere refusing to publish in it.

For five years, thousands of Jewish and non-Jewish medical experts, including Nobel Prize winners, refrained from submitting articles and reviews to The Lancet, or other titles from publisher Elsevier.

During that time, a petition of around 1000 health professionals – and an online petition bearing some 4000 names – was directed at Elsevier, with a number of Australian signatories.

But last month, after The Lancet published an insightful article into the worldwide rise in antisemitism, Zimmet and Professor Julio Rosenstock from Dallas wrote to Horton informing him that they had noted a change in the journal’s tone towards Israel and were ending the boycott.

Following the 2014 letter, Horton had been invited to Israel by physicians at Rambam Medical Centre “and I think his position softened and he agreed to publish in The Lancet a number of papers which were positive in terms of medicine and science in Israel”, Zimmet told The AJN. “And I think he recognised that … Israeli physicians were seeing [Gazan] patients.”

After Horton revisited Israel and met with President Reuven Rivlin, he was “becoming more sympathetic”, said Zimmet. However, the group kept the pressure up, “wanting to see more action”.

Then last month, Horton published a commentary on the abuse of medicine during the Holocaust, in which he more broadly lamented the resurgence of antisemitism.

The standoff “had gone for five years and we were already talking a few weeks prior to [the July article] about writing to him, and then of course, when we saw that article on the Holocaust, we thought this was the time”, said Zimmet.

Rosenstock, Zimmet and a small working group asked Horton to publish their article “Bringing closure: towards achieving a better understanding of Israel” in The Lancet to which Horton quickly assented.

“To me, it’s quite something,” said Zimmet, noting that while The Lancet would have been feeling the pressure of a wide circle of medical authorities declining to write for it, he believes Horton adopted a new outlook because he “suddenly found out a lot more about … the involvement of the Israel medical profession [in aiding Gazans]”.

Zimmet said Horton sent an email emphasising “how important it was for him personally and professionally that this was resolved. The original letter was a very bad mistake and he expressed in his email to us that he was very sorry now that he had published it”.

However, Zimmet cautioned, “We’ve got to keep a watch out that this doesn’t pass and we’ve made the wrong call.”

For their part, Zimmet and his colleagues were concerned about depriving young medical researchers of opportunities to publish in the esteemed journal. “I think that was something that influenced us to try to end [the dispute].”

Asked whether their boycott weakened the case against BDS, Zimmet said simply, “We had no other option.”

He added, “This has been a long action and has had many twists and turns but should be a path to getting back to science and casting Israel in a much better light with better understanding of its delicate position in the highly charged environment in the Middle East.”