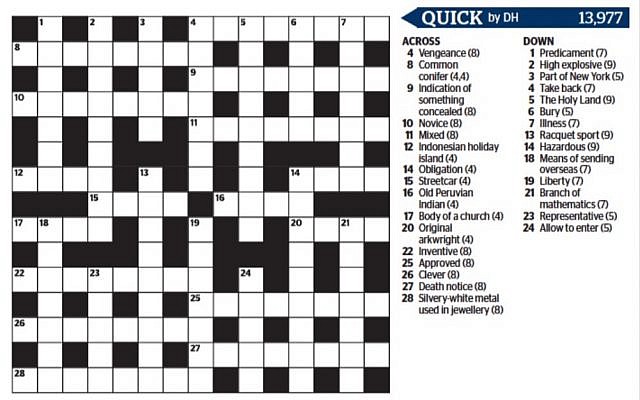 THE Sydney Morning Herald (SMH) has launched an investigation after a crossword in its Tuesday edition – also featured in The Age – appeared to recognise “Palestine” as the Holy Land.

The issue was first raised by the Australia/Israel & Jewish Affairs Council (AIJAC), which wrote on Facebook, “Today’s crossword clue: The Holy Land. Surely the answer is Israel? Unless, you are doing the crossword in today’s Age and Sydney Morning Herald newspapers, where the Holy Land is apparently Palestine.”

SMH editor Lisa Davies told The AJN, “The crosswords are provided by an external contractor (they’re not done in-house) so I wasn’t aware of this. We are making inquiries about this immediately.”

The papers also put out a statement in which they said they “apologise for any offence caused”.

AIJAC executive director Colin Rubenstein told The AJN the “real puzzle” is why “a wrong or, at best, incomplete answer” has been given.

“More seriously, the link between the Holy Land and the name Palestine only begins after 134 CE when the Romans renamed ancient Israel as Palestine in an attempt to expunge its Jewish identity,” Rubenstein said.

“The profound historical and religious events mentioned in the Jewish and Christian traditions would have taken place before then when it was Israel and Judea. In fact the word Palestine never even appears in the Christian Bible. So at the very least, the answer should have included a reference to Israel.”