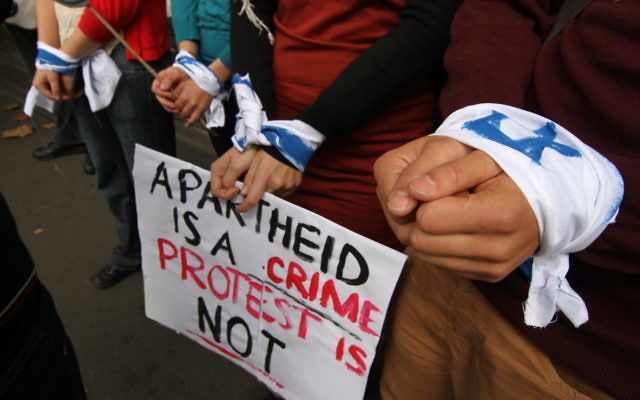 ANTI-ISRAEL protestors on the steps of the Melbourne Magistrates’ Court bound their hands with Israeli flags and taped their mouths shut as the trial of Boycott, Divestment and Sanctions (BDS) demonstrators got underway this week.

Dubbed the “Brenner 19”, the accused – including Melbourne Jew James Crafti – were arrested outside Israeli chocolate retailer Max Brenner in July last year and are facing charges including trespassing, besetting and assault.

While protestors claimed the Victorian government was engaging in a political “witch-hunt”, president of the Jewish Community Council of Victoria (JCCV), Nina Bassat, said police had acted in accordance with the law. “The legal system is in place and some people choose to see it as a witch-hunt,” she said.

“The police escalated their reaction when the protestors became less mindful of the rule of law. That’s when the police had to step in and be more vigilant,” Bassat said.

But according to Students for Palestine member Rachel Sztanski, Victoria Police had used “thuggery” to silence dissent at the demonstration last year. “It’s a civil right to have freedom of speech and to protest,” she claimed.

While Bassat said there had been a “huge conflation” between Israel and Jews among BDS proponents, defendant Jerome Small said there was nothing anti-Semitic about protesting for Palestinian rights. “To throw the anti-Semitic card is the oldest trick in the Zionist book,” he said.

As the only Jewish defendant, Crafti said misinformation created by the State of Israel generated anti-Semitism.

“Anti-Semitism is caused by a false connection between Jewish people and the State of Israel,” he said.

The trial is expected to last two weeks.