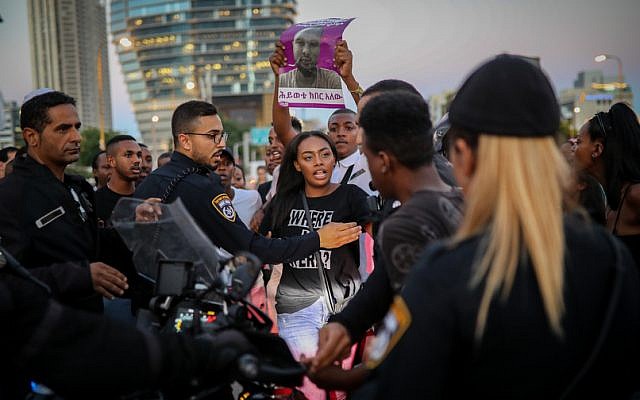 ETHIOPIAN parents in Israel fear for the safety of their children, protesters claimed at angry demonstrations this week.

They waved banners saying, “Don’t let me be the next victim, mum.”

The message was that, almost a fortnight after the killing of Solomon Teka by an off-duty policemen, the Ethiopian community is alarmed by police brutality.

“Enough of the abandonment”, declared Ethiopian-born Knesset member Pnina Tamano-Shata, who went out to demonstrate. “Let every parent raise their child.”

The protests are one of Israel’s top stories, and the Ethiopian community in Israel has rarely had so much attention. And Australian Jewish donors are stepping in to ensure that their demands continue to be heard even after the demonstrations die down.

The New Israel Fund (NIF) Australia has wired an emergency grant of $20,000 to the Association of Ethiopian Jews (AEJ) because “every Jewish community around the world should help the Ethiopian-Jewish community to strive for a fairer and more just society”, NIF Australia executive director Liam Getreu told The AJN.

Protesters in Israel are claiming that Teka’s death points to a wider phenomenon of police being overzealous in dealing with people from the Ethiopian community. Both police and Israel’s Public Security Minister Gilad Erdan have acknowledged the criticism of over-policing, and Erdan told Ethiopian community leaders: “We are fighting it.”

But for protesters, change isn’t happening fast enough. There slogans note that Teka is the 11th Israeli of Ethiopian descent killed in a confrontation with police since 1997, and the second this year. Getreu said that the Australian money will help to pay for professionals to get “unjust police cases” against Ethiopians closed.

The Haifa park where Teka was shot was quiet this week, the only sign of the incident being an impromptu memorial that has been set up, with his picture taped to a concrete post. It is still unclear what happened when Teka was shot here.

Some are suggesting that the officer fired the shot because he was dealing with an altercation. Police officials have said that efforts are being made to build relationships with Ethiopian communities. Acting Israel Police chief Motti Cohen said that though the officer who shot Teka has been arrested he should be given the presumption of innocence.

However, there is widespread suspicion, especially among Ethiopians, that he acted wrongly. Erdan hasn’t commented on where the investigation stands, but he did respond to public concerns, saying, “We must deal with violent policemen who exploit the force given by the law.”

Ethiopians were not the only Israeli minority accusing the police of brutality when Erdan spoke. Footage has emerged that appears to show a Charedi man being beaten by police and pulled to a police vehicle after a demonstration in Beit Shemesh on Friday. The officer concerned has been suspended pending investigation, and the Charedi man who was hurt, Mordechai Kreuzer, has been quoted calling the incident “very scary” and likening his treatment to antisemitism in Europe many years ago.

The AEJ says that whatever the outcome of the Teka case, the state must pay attention to the many grievances that the killing has brought to the fore. AEJ director Shlomit Bukaya responded sharply during a television interview this week when a police representative talked of attempts to engage Ethiopian officers and understand Ethiopian-Israeli culture.

This policy “gives me the chills”, she said, insisting that has she has lived in Israel since the age of five and her culture and Israeli culture are the same. Officers don’t need cultural coaching just to banish racism, she said, recommending: “Deal with the police culture and provide your officers with psychological treatment.”

These criminal records stop people from studying or working, and President Reuven Rivlin is giving pardons to many of them. Dvora Greisman of the AEJ told The AJN: “With Australia’s support, AEJ will work to lower the number of criminal cases opened against Ethiopian Israelis and to increase and speed up the pardoning process by assisting the President’s in-house legal adviser.”

Discussing the demonstrations, she said, “For the first time in years, everyone we’re talking to, every newspaper, every educator is concerned, and this has brought the issue of discrimination to the forefront.

“People can absorb a lot of injustice but there’s major concern when it comes to the point that mothers and fathers cant let their kids out of the house without having deep worry that they may not come home at the end of the evening but instead get incarcerated and ending up with a criminal record.”

Greisman added, “When there are demonstrations the leaders cant’ be cynical, they need to say that they must meet the needs of citizens. People say: ‘I can no longer put the issue of racism against Ethiopians at the side because it’s the number one issue people are talking about.'”