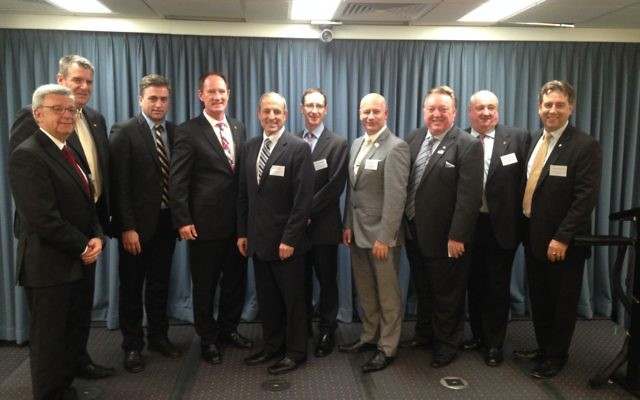 THE Queensland Parliamentary Friends of Israel met last week for the first time since the election of the new Labor government.

“It was extremely gratifying to see the bipartisan presence in the room,” Alhadeff said.

“Such principled support for Israel from both sides of the house is greatly appreciated, as is the excellent relationship between Queensland MPs and the QJBD.”

Alhadeff’s speech focused mainly on the growth of anti-Semitism throughout Europe and in Australia. He encouraged the parliamentarians to ensure that Queensland’s racial hate laws were able to be an effective deterrent against hatred of any ethnic group.

Newly elected Labor MP for Logan Linus Power gave a vote of thanks, highlighting his support for the Jewish community and Israel.

Steinberg, who also addressed the members to thank them for their time and for their support, said it was a very positive meeting.

“It was very constructive; the members who were there all expressed their interest in coming to the next meeting,” he said.

“Given the pressures on parliamentarians, for them to spend their dinner break, 45 minutes of their time to participate in the meeting, was very positive.”

He added: “We have a very good relationship with Queensland parliamentarians from both sides and that’s longstanding.”

Steinberg also said an Israel study tour, such as the one conducted by the NSW Parliamentary Friends of Israel in 2013, was another possibility going forward.

“That’s definitely the plan, obviously tying in with AIJAC [Rambam] and other similar programs,” he said.

“The parliamentarians expressed interest in that. One of the key things for the Parliamentary Friends group is to ensure there’s the opportunities, say around innovation or water, to collaborate with Israeli entities and government.

“Innovative water use is very topical in a place like Queensland.”

The meeting was chaired by Liberal National MP for Chatsworth Steve Minnikin, who established the group in 2013.