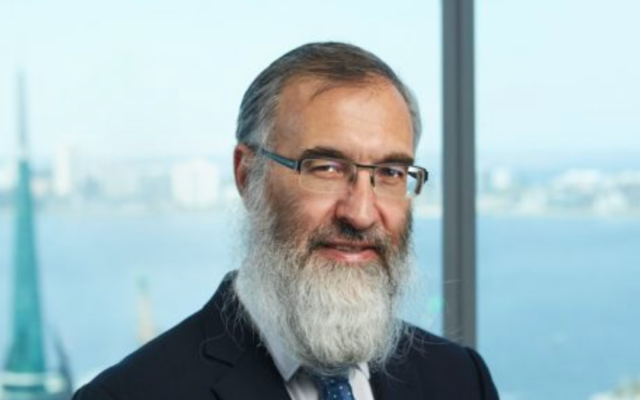 RABBI Marcus Solomon told The AJN this week that being the first Orthodox rabbi appointed to an Australian Supreme Court is “both an honour and a responsibility”.

Perth-based Rabbi Solomon, who juggles being a barrister with his role as rabbi at Dianella Shule, took up his position as a judge of the Supreme Court of Western Australia this week.

“It’s obviously an honour to have been appointed and to serve the public in that capacity, but it’s also a very heavy responsibility, because you have in your hands the fate and destiny of many people in respect of important matters in their lives,” he said.

He said being a rabbi means “you bring to anything you do a finely-honed appreciation of the analysis of law and facts in any given situation”.

“Being a rabbi assists me to perhaps appreciate the human story,” he added, “and the humanity that lies behind each of the very difficult matters that come before the court for resolution”.

He intends to continue giving his time to Dianella Shule and Carmel School, where he sits on the board.

“Jewish education is absolutely my foremost passion. So long as I can discharge my judicial functions faithfully, I intend to do whatever I can to maintain my roles within the Jewish community,” he said.

“My dad has always been a shining example of someone who could lead their life as a proud and committed Jew (and rabbi) while excelling in his profession. We are exceptionally proud of his achievements.”

Rabbi Solomon graduated from law at the University of Western Australia with First Class Honours in 1991, working as a solicitor and then a partner at two major law firms before moving to the independent Bar. He was appointed Senior Counsel in 2013.