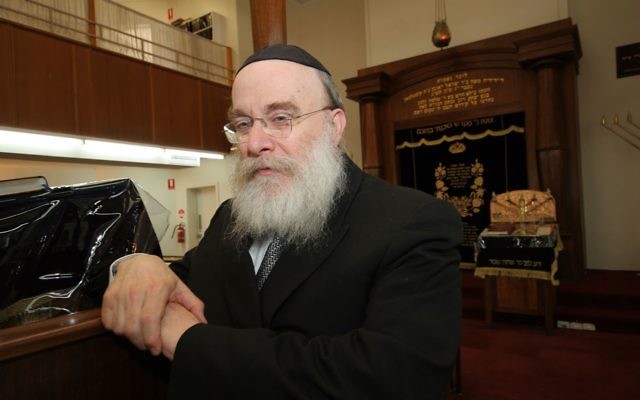 CHILD sexual abuse victims and communal leaders have welcomed the resignation of the Yeshivah Centre’s senior rabbi, who stood down on Tuesday, admitting that his conduct towards victims and their families has not be in line with the values of Yeshivah.

Rabbi Zvi Hirsch Telsner announced his decision after he clashed with a victim last week.

The AJN understands that the victim spoke to Rabbi Telsner to raise a problem regarding someone in a position of leadership at Yeshivah.

Rabbi Telsner allegedly dismissed the complaint, said that people were just trying to destroy Yeshivah, referred to victim Manny Waks’s father as a “meshugane” and said that another victim was just causing problems.

Rabbi Telsner also allegedly told the victim of child sexual abuse to “get out”.

The victim wrote to Yeshivah’s interim Committee of Management (COM), stating, “It is shocking and hurtful that the head rabbi maintains and expresses the insulting and unjust views.”

He told the COM that Rabbi Telsner is “clearly bringing the institution into further disrepute and at this point, in light of his untenable and offensive statements and his proven lack of commendable leadership in the past in issues relating to sexual abuse, the appropriate response is that he be immediately stood down”.

The AJN understands Rabbi Telsner and the COM met to discuss the issue and what action would be taken, which is when he informed them of his decision.

“As a senior rabbi at the Yeshivah Centre I acknowledge and endorse its values, policies and message of continued support and compassion for victims of child sexual abuse, their families and all of the community,” Rabbi Telsner said in a letter to the community.

“I recognise that my conduct towards victims and their families did not demonstrate these values or behaviour to the extent necessary of a rabbi in my position. Accordingly, I have decided to stand down from my position as rabbi at the Yeshivah Centre, effective immediately.

“We all must be aware of how our words and actions impact on others and therefore would like to take this opportunity to apologise for my ­conduct, and urge everyone to show compassion and support towards victims and their families throughout the moised (institution) and broader community.”

Yeshivah’s interim COM wrote to the Yeshivah community, noting of the clash with the victim that “such values or behaviour to the extent required of a rabbi in his position were not demonstrated”, adding, “We support his decision and immediate resolve.”

Earlier this year, the Royal Commission was told that in a sermon Rabbi Telsner gave at Yeshivah, the family of Manny Waks felt they were being condemned for speaking publicly about the abuse he suffered.

Welcoming the resignation, Waks, said, “It is a great shame that it took this long and so much advocacy by me and others to get to this point.”

The resignation was also hailed by victims advocacy group Tzedek and Jennifer Huppert, president of the Jewish Community Council of Victoria, who said it was a “significant step towards healing the wounds from the cases of child abuse at the Yeshivah Centre, and the serious issues highlighted at the Royal Commission”.

Executive Council of Australian Jewry president Robert Goot said: “The only morally and legally acceptable approach to child abuse is one of zero tolerance. This has been belatedly recognised by Rabbi Telsner’s resignation from Melbourne Yeshivah, as painful as his departure undoubtedly is for many people in that community.”

Rabbi Telsner did not respond to calls from The AJN.