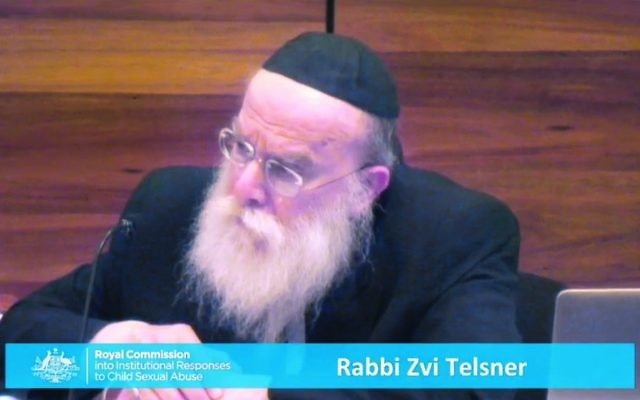 MORE than two years after Rabbi Zvi Hirsch Telsner resigned from the Yeshivah Centre after admitting his conduct towards victims of child sexual abuse was not acceptable, he was officially given a new contract this week.

Stunned victims of abuse said the appointment is “a huge slap in the face”.

“At a time when other community institutions are avoiding being associated with those implicated in the child sexual abuse scandal in our community, it is Yeshivah alone, the institution responsible for the rape and abuse of dozens of children in its care, that considers it appropriate to reward Telsner with a new contract,” child sexual abuse victim and advocate Manny Waks said.

Waks added that the appointment “sends a message to victims – that Yeshivah still do not ‘get it’ and you will find no support from within that community”.

According to findings published by the Royal Commission into Institutional Responses to Child Sexual Abuse, Rabbi Telsner’s comments while Yeshivah’s head rabbi were “likely to have the effect of dissuading some members of the Yeshivah Melbourne community from communicating with the secular authorities about child sexual abuse” and he failed to “provide pastoral leadership, support, direction and affirmation for abuse survivors, their families and advocates”.

Despite that, the board of Chabad Institutions of Victoria, which includes Avi Althaus, Yossi Gestetner, Rabbi Chaim Tzvi Groner, Yisroel Paltiel, Rabbi Binyomin Serebryanski, Saul Spigler, Yankel Wajsbort, Chana Warlow-Shill and Rabbi Chaim Dovid Wilhelm, wrote to the community this week stating that Rabbi Telsner had been offered a new contract in a diminished role.

“Rabbi Telsner and the board have reached a mutually beneficial agreement.

“Rabbi Telsner does not and will not be holding any formal position within the Shule.

“The board recognises Rabbi Telsner’s value to the community and as such, the CIVL Board has chosen to retain Rabbi Telsner to perform non-congregational/non-pulpit duties.”

Rabbi Telsner told The AJN he had no comment to make.