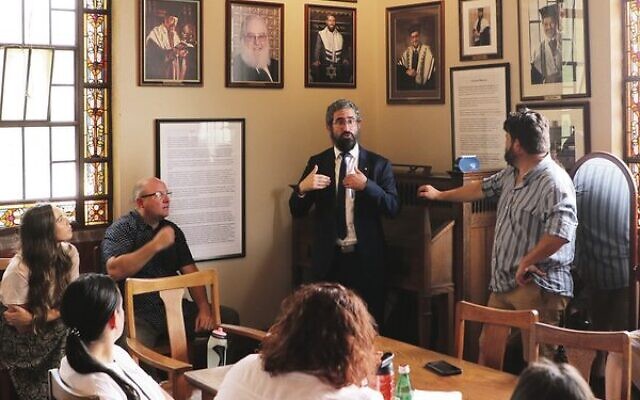 Rabbi Glasman talking with the team. Photo: Will McEniry

THE Big Build is making its way to the Jewish community.

Given that area is highly saturated with Jewish people and the removal team will be spending a lot of time there in the near future, they wanted to engage with the community, and to learn more about their wants and needs.

Team leader Jonny Schauder organised the visit with his eldest daughter Hannah to bring 15 project representatives to experience a tour of the Jewish community, from a rugelach pit stop to Beth Weizmann, and from Anzac memorials to Glicks. The Jewish adventure organised by Schauder who is Jewish himself, helped the team explore the eruv, Blake Street and St Kilda Shules and assisted them in learning all the basics of the Jewish year, Shabbat and traditions.

Schauder told The AJN, “Understanding security, diversity and the depth of the community’s history and connection to the Holocaust and Israel is critical for the more than 370 team members working on the Glenhuntly upgrade.”

He said that Rabbi Glasman of St Kilda Shule’s “welcoming, caring and extraordinary shofar blowing under the beautiful dome moved the entire group to emotion and deep engagement with the experience”.

Rabbi Glasman told The AJN, “I had the opportunity to afford the group a glimpse into the Jewish festivals and the structure of a shule, as well as talking about the various rabbinic bodies I’m involved in and the relationship St Kilda Shule has with Victoria Police.” He added, “The team were very keen to understand some of the unique elements of the Jewish community in order to know how to best carry out the railcross removal while being sensitive to the cultural and religious sensitivities of the community.

“They asked questions about Shabbat observance and the kosher dietary laws given the automated traffic lights and the kosher supermarkets and eateries around the Glenhuntly railroad crossing area.”