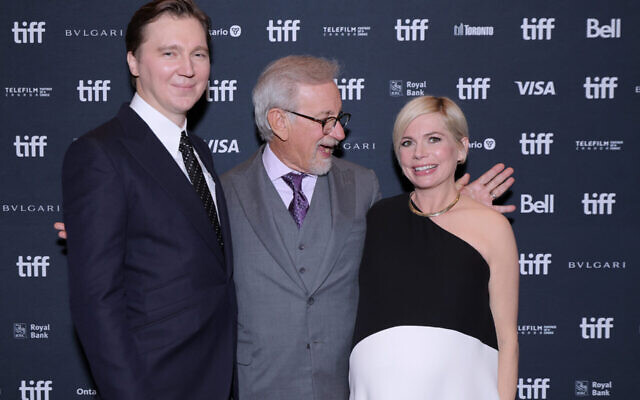 Michelle Williams is one of the only non-Jewish actors with a starring role in The Fabelmans, director Steven Spielberg’s autobiographical film based on his Jewish family.

But it turns out that Williams, who plays the Spielberg character’s mother, has a Jewish family of her own. She told the Wall Street Journal that she and her Jewish husband, director Thomas Kail, are raising their two young children with Judaism and that she is studying the religion herself.

“I can’t teach it to them unless I learn it first,” Williams, who was raised Christian, told the newspaper. She said she and Kail had picked out a synagogue for their family and also said that she had positive memories of Jewish traditions from her Jewish childhood friends.

“I adored being in their homes — a lot of it is those early memories of the discourse at the tables and the deep sense of belonging that tradition fosters,” Williams said. “It has always been something that I’ve gravitated towards, something that felt immediately exciting and deep and very different from the tinsel and cheer. I say this as somebody who also sings Christmas songs to my kid before he goes to bed. I love both.”

Williams has won acclaim — along with two Golden Globes and an Emmy award — for her performances in indie drama movies and shows such as Brokeback Mountain, Blue Valentine and Fosse/Verdon. She is winning accolades now for her portrayal of a character loosely based on Spielberg’s mother, Leah Adler, a popular Los Angeles kosher restaurateur who died at 97 in 2017.

Kail is best known for directing Lin-Manuel Miranda’s hit Broadway musical Hamilton. In 2020, he was tapped to direct a film remake of Fiddler on the Roof that is still in development.