When Australia made its debut at the third Maccabiah Games in 1950, 20 nations participated, and the green and gold was represented by just one athlete, tennis player Elias Honig. He’d travelled from Melbourne to Israel by ship.

Honig proudly marched in the opening ceremony, and then in his event, he defeated Swedish and Dutch players, before bowing out in the third round to Israeli Davis Cup team member Arie Avidan-Weiss.

Australia has since participated in every Maccabiah Games, which grew to be one of the top-four largest sport events in the world, based on participant numbers.

And it’s little wonder, as Maccabiah holds a unique ability – through the prism of sport – to connect 10,000 athletes and thousands of travelling supporters, with Israel, with their heritage, and with Jews of all ages from across the Diaspora. 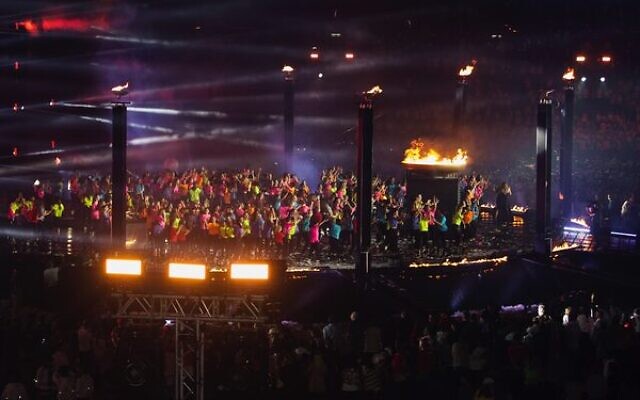 The Maccabiah Games flame will be lit again at the start of its 21st chapter, on July 14 in Jerusalem, in front of a capacity crowd. Photo: Julie Kerbel

For the Aussies, attending the Games pre-camp in Netanya from July 7, visiting the Western Wall together, marching behind the Aussie flag at the July 14 opening ceremony in a packed Teddy Stadium in Jerusalem, and competing for Australia in their sport for up to a fortnight, will create lifelong memories.

For some, it will be their most significant connection to Israel and Judaism yet.

There will also be 30 Australians taking part in a VIP supporters’ tour.

The 21st Maccabiah Games – from July 12-26 in the main host cities of Jerusalem (open men’s and women’s), Netanya (masters) and Haifa (juniors) – faced significant planning obstacles, including the pandemic and a one-year postponement.

Yet the Aussies will be represented by an impressive 535 athletes – aged between 13 and 83 – narrowed down through a selection process from a mind-boggling 800 nominees.

That makes Australia – after Israel and the USA – neck and neck with Canada as the largest team, out of the 80 participating nations.

Crucially, they are being supported by a massive army of 85 volunteers, including team coaches and managers, doctors and physiotherapists, a media crew, a sports psychologist, a full-time security coordinator, masters manager Lauren Ehrlich, juniors manager Debbie Rutstein, and head of delegation Barry Smorgon.

The two most senior managers in terms of responsibility – head of operations and sport Sam Gamsu, and head of support services and open division manager Giselle Berlinski – were deservedly presented by Smorgon with the inaugural Maccabi Australia National Outstanding Service Award on June 2. 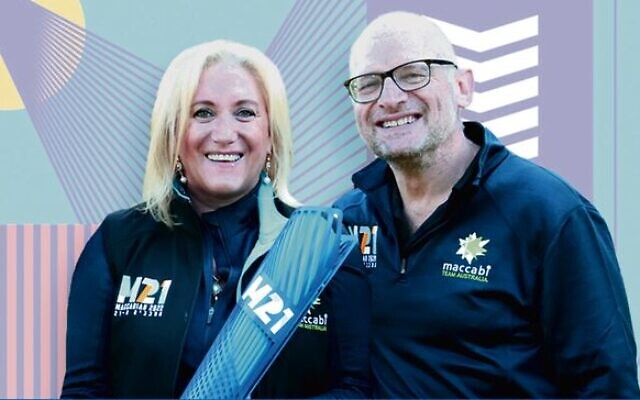 Under their leadership, Australia played a crucial role, in the shadow of the pandemic, in maintaining momentum towards the Games – particularly for the English-speaking delegations – and led the way in professionalism by producing the most comprehensive safety and security manual, and a detailed critical incident plan.

“The body of work they’ve done over the past two years is simply incredible – they’ve put their private lives on hold for the benefit of our team,” Smorgon said.

Gamsu revealed, “Giselle and I never doubted the Games were going to happen, because you can’t put in so much effort without believing.

“We consider this award as really going to all the volunteers, as we couldn’t have done anything without their efforts and support.” 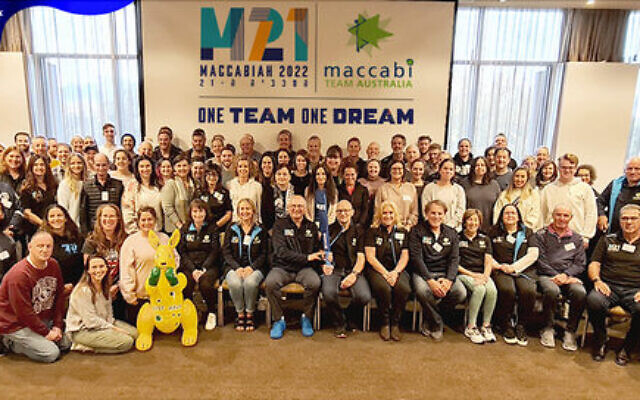 With team uniforms being issued to the Aussie athletes, an official team farewell reception on July 21 at Victoria’s Government House, one in Perth, and one to be held on June 26 at NSW Government House, Berlinski said, “It actually feels real now, and super exciting.

“The Maccabiah Games opening ceremony is going to be an amazing experience, knowing everyone’s story, and how they’ve put in so much work along the way … to see them enjoy that moment will be so special.”

Speaking of special, there was a spine-tingling pep talk delivered to all the Aussie delegation’s volunteers by a surprise guest speaker at the Yarra Valley conference, Baruch Ben Yigal.

Although Israeli, he is considered an honorary member of the Australian delegation, for volunteering at every Games pre-camp since he selflessly dived into the Yarkon River to rescue Australian team members during the 1997 Maccabiah Games bridge collapse disaster, which killed four Australians.

At the conclusion of the Games, a perpetual award named after Baruch’s son, Amit – who was killed by a Palestinian terrorist in May 2020 while serving in the IDF – will be presented to a junior Australian athlete.

“So thank you, good luck, and I hope you win a lot of medals!”

Four faces, one team, one dream

Meet some members of the Australian delegation, from the youngest, to the most experienced, to a professional athlete in her prime.

A junior table tennis player from Melbourne, who can’t wait to go to his first Maccabiah Games. 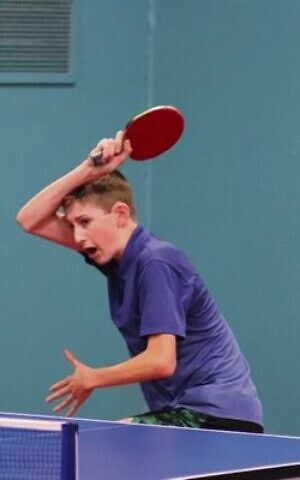 You turned 13 in April. As the youngest Australian team member at the 2022 Maccabiah Games, by several months, what motivated you to make your debut now?
SHAMIR: I love a challenge, and try to take on as many opportunities as I can. I’m the highest ranked Maccabi junior for table tennis in Australia, so hopefully I’ll be competitive.

How has your preparation been going?
SHAMIR: I currently train four times a week, and the week before we depart, I’ll play at the nationals in Queensland, so that’ll help me get ready too. My goal is to have as much fun as possible, and hopefully bring back a medal.

What are you most looking forward to?
SHAMIR: Meeting other teenage Jews from around the world, and experiencing Israel’s culture. The included day tours for the junior athletes sound incredible. And I’m super excited because this will be my most senior table tennis tournament. 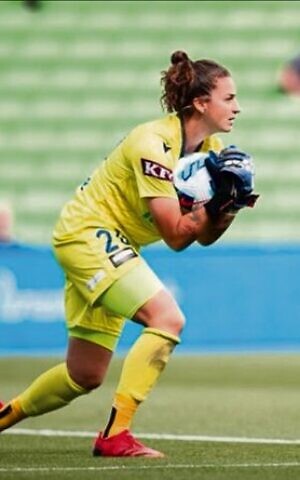 A goalkeeper in Melbourne Victory’s A-League Women’s squad, she will head to Israel as player-coach of Australia’s open women’s futsal team.

How would you sum up your first Maccabiah Games experience in 2017?
MELISSA: It was unbelievable … just to go through, firstly, the discovery of my Jewish heritage [through her grandparents], and then to be thrust into the Maccabiah environment, and be able to visit Israel – all within a month – it was incredible.

What has drawn you back for the 2022 Maccabiah Games?
MELISSA: I loved the energy, and feeling like I was part of something bigger. The whole Australian delegation made me so welcome. I want to experience that again, and also give back to the Jewish sport community, so I’m going in a coaching capacity too.

Your team was in the women’s football draw, but short of a full squad, it switched to futsal. How has the team been preparing?
MELISSA: The rest of the team live in Sydney and have been training well together, and with their clubs. On the recent long weekend, I flew there for a solid three-day training block, which we’ll build on in our pre-Games camp in Netanya. I’m super excited about our mix of talented footballers and state rep futsal players, but even more so about their character. Our aim is to do ourselves, and Maccabi Australia, proud. 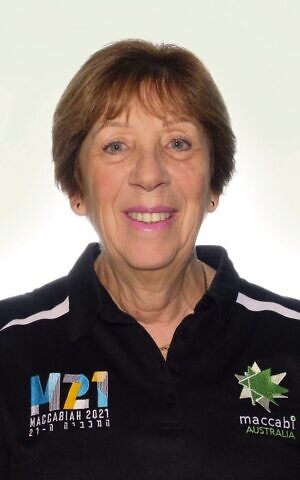 The Australian masters division assistant manager will be going to her eighth Maccabiah Games. She has been an athlete at three, and a manager at four.

What do you remember most about your first Maccabiah Games?
JUDITH: It was in 1977, and I was the Australian track & field team’s assistant manager. The opening and closing ceremonies were definite highlights, with the Israeli national anthem stirring up incredible emotions, as it still does.

What is your most cherished Maccabiah Games moment?
JUDITH: Winning bronze in the women’s javelin in 1981. Training with a specialist coach in Melbourne, and qualifying early, allowed me to do my best. Standing up on the dais, with a koala [plush toy] in one hand, and receiving my medal, was a very precious moment.

Why have you kept coming back to the Games?
JUDITH: Being in Israel, and being part of this event, is a wonderful experience. As an athlete, or in management, the Games have been the highlight of my 54 years’ involvement in Maccabi Victoria.

What advice would you give to those representing Australia at their first Maccabiah Games?
JUDITH: You are not just there to compete. Look around you, at what Israel has achieved; take in the sights, sounds and the people; meet fellow athletes. Compete to the best of your ability, and be thankful for the chance to visit an amazing country, whilst representing your own. 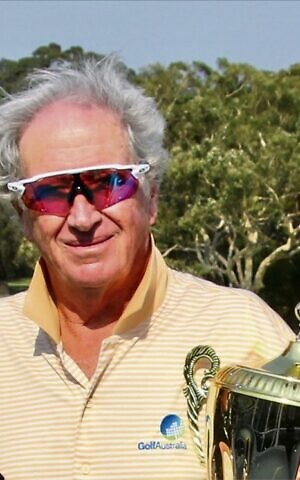 The winner of the 2019 Maccabi NSW Jewish Golf Championships is about to head to his 12th Maccabiah Games as an athlete – the most by any Australian.

What do you remember most about your first Maccabiah Games?
ROY: It was 1977, and I remember making a statement at the end, that I’d keep coming to the Maccabiah Games as long as I’m picked. Why? Because I loved it from the beginning.

What are your most memorable Maccabiah moments?
ROY: Winning gold in masters golf in 2013 was a real highlight, and very exciting, as it came down to the last hole. Also, making good friends at the Games, like former US Open champion Corey Pavin, who won the men’s golf gold in 1981, over runner-up and fellow American Joel Hirsch. Joel and I became best friends.

What keeps you coming back?
ROY: I just thought, I’m 75, and life’s too short, so I’d better go again, and I’m playing pretty good golf. Plus Australia has a great team environment, so after my masters event, I hope to be one of the caddies for our open men’s team.

What advice do you have for Maccabiah Games debutants?
ROY: Give yourself every opportunity to do well, but also remember we’re all Jewish athletes, we need to support Israel, and that’s why we’re there. So make sure it’s an experience you’ll always remember.