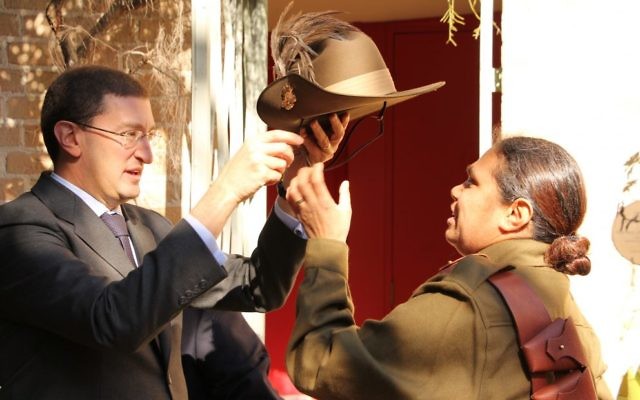 TEARS were shed at a moving ceremony in Sydney last Sunday, when Jewish federal MP Julian Leeser presented certificates to 12 descendants of Indigenous men who served in Australian Light Horse brigades during the WWI Sinai-Palestine campaign.

The group is taking part in the Rona Tranby Trust’s Australian Light Horse Project, which will see them research and record the stories of their ancestors.

The project will culminate in a trip to Israel for the October 31 Anzac Centenary Commemoration ceremony of the pivotal Charge of Beersheva, where they will saddle up on horseback as part of the battle’s re-enactment.

Two of the participants’ forebears – Charles Fitzroy Stafford and Jack Stacey – actually took part in the Charge, as members of the 12th Light Horse regiment.

Several other relatives of the participants served in the 1st and 2nd regiments, and also the 11th – which had a significant contingent of Aboriginal Diggers from Queensland who became known as the “Black Watchmen”.

Leeser – whose great-grandfather Sylvester Henry Browne served in the 1st Light Horse brigade – said “this is another wonderful twin project between the Jewish and Indigenous communities in our country, and it continues a relationship that goes back, as far as I can recall, to the time of William Cooper”.

“Unfortunately on their return to Australia, Indigenous servicemen did not receive the recognition in civilian life that their non-Indigenous compatriots did … so this project carries special significance.

“I congratulate the Rona Tranby Trust for their incredible work …  and I’m pleased the Australian Government is supporting this fantastic initiative with a grant of $85,000.”

After the presentation, participant Terry Hutchinson revealed he’ll be the first person in his family to visit the grave in Beersheva of his great-uncle Ernest James Firth of the 1st Light Horse Regiment, and will sprinkle soil from the Pilliga region onto it.

Elsie Amamoo – the great-granddaughter of Frank Fisher who served in 11th Light Horse regiment – said she only found out through the project that she was also the great-niece of that regiment’s member Alexander Stanley, who was the grandfather of fellow participant Angela Stanley.

“That’s just another bonus,” Amamoo, who was moved to tears, said.

The project is supported by organisations including JNF, the Australian War Memorial, the Centenary of Anzac Jewish Program, the Executive Council of Australian Jewry and the NSW Jewish War Memorial.