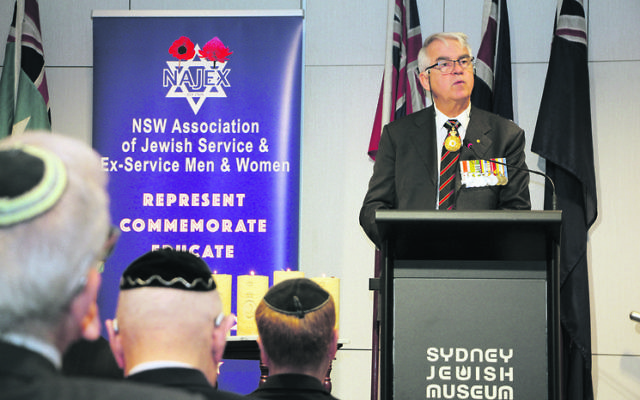 SYDNEY’S Jewish Remembrance Day service is always deeply moving, but it held even more resonance in its latest chapter at the Sydney Jewish Museum last Sunday – almost 100 years to the day since the guns fell silent at the end of World War I, and 95 years since General Sir John Monash officially opened the NSW Jewish War Memorial.

About 200 people – from war veterans and politicians to Jewish school captains and Rose Bay (Judean) Scouts – attended the service hosted by NAJEX (NSW Association of Jewish Service and Ex-Service Men and Women), which also officially marked the end of the five-year Centenary of Anzac Jewish Program (CoAJP).

That milestone was not lost on keynote speaker Lieutenant General Ken Gillespie, a former vice chief of the Australian Defence Force, chief of the Army and chair of the NSW Centenary of Anzac Advisory Council.

“The efforts of the NSW – and wider Australian – Jewish community in supporting both learning and commemorative activities has been very significant,” Gillespie said.

“The launch of the Mark Dapin book Jewish Anzacs in this venue in 2017, and my attendance at the Centenary of the Battle of Beersheba in Israel last year, are two personal highlights.

“Throughout the centenary events, we learned of the service of some 2300 Jewish enlistees in the first Australian Imperial Force.

“We also endeavoured to understand the enormity of the tragedy which befell families and communities,” Gillespie said.

“The peace, security and prosperity enjoyed by our nation today has its roots in this service and sacrifice.”

“It was called the war to end all wars, but over the last 100 years more than 127 million people – many of them civilians – have been killed in wars,” Rabbi Kamins said.

“Today, we remember the gallant service of men and women of our country, who went to the front lines to fight for the values we hold dear – freedom, democracy and equality.”