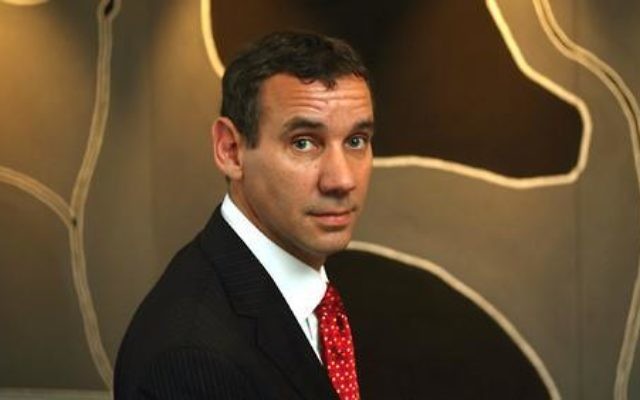 AUSTRALIAN-born Mark Regev, a seasoned Israeli diplomat and the face of Israel on the world’s TV news bulletins, has reportedly been picked for the prestigious post of ambassador to the United Kingdom.

Contacted in Jerusalem by The AJN, Regev declined to comment until a posting was officially announced, but communal leaders and former Mount Scopus College schoolmates and Habonim members didn’t hesitate in cheering the news and expressing their congratulations.

Regev, 55, born Mark Freiberg, son of Martin and Freda Freiberg, grew up in Melbourne, went to Mount Scopus College and Kew Synagogue, and was part of Habonim.

Judy Becher of Melbourne – whose brother David went on aliyah with Regev in 1982, along with Mount Scopus school friends Oren Zauder and Martin Burd – catches up frequently with Regev when she visits Israel or when he visits Australia.

“It’s remarkable how he balances family and work life. I’ve seen him at picnics and barbecues, and he can be flipping a burger and talking to CNN on the phone,” she told The AJN.

Becher said Regev and his Australian expat friends in Israel gather every year for an Australian-flavoured Yom Ha’atzmaut barbecue and catch-up, and Regev regularly visits Melbourne.

Philip Hall, who went to Mount Scopus and Habonim with Regev, recalled that in their early teens, Regev and his friends would hold sophisticated discussions on world events that would leave the madrichim, aged in their early 20s, gaping. “He was ahead of his time, an extremely articulate person at an extremely young age. But he was a lot of fun too and knew how to have fun with the best of them. He’s very grounded.”

Zionist Federation of Australia president Dr Danny Lamm said Regev’s London embassy posting will be Israel’s most senior appointment for an Australian-born diplomat to date. “It’s a terrific recognition of the calibre of the man and the principled position he adopts in representing Israel to the world. We’re delighted that an Australian oleh has achieved such great success and has also shown so much devotion to Israel. It’s a credit to his family, to his youth movement, his synagogue and his school.”

In 1982, he made aliyah and changed his surname to Regev. After lecturing in international relations and strategy at the Israel Defence Forces Staff College, he joined the Foreign Affairs Ministry in 1990, serving as deputy chief of mission at the consulate in Hong Kong and as a ministry spokesman from Israel’s embassies in Beijing and Washington. In 2004, he became the Foreign Affairs Ministry’s spokesman in Jerusalem.

Three years later, he became spokesman for Prime Minister Benjamin Netanyahu’s office and, as in his role at Foreign Affairs, he became Israel’s global English-language voice during the Gaza campaigns and other crises.