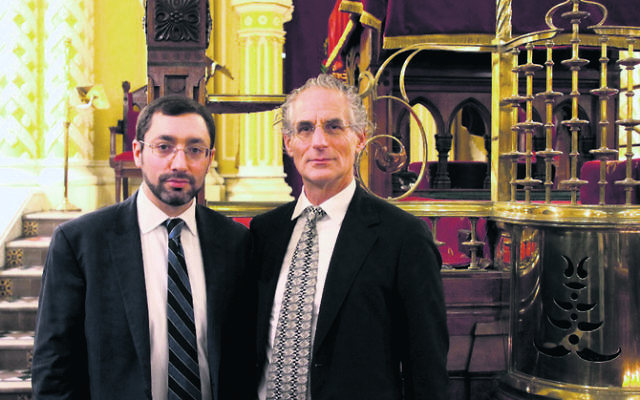 SYDNEY’S Jewish community put religious differences aside at a pluralistic vigil for the victims and survivors of the Pittsburgh synagogue massacre last Wednesday night.

More than 800 members of the community attended the event at Sydney’s Great Synagogue, at which Modern Orthodox, Chabad and Progressive clergy all played roles in the official proceedings.

Great Synagogue president Justice Stephen Rothman said the shule “was honoured” to host the service.
“We are a people that is small in number and our community throughout the world feels every tragedy as if it happened to us,” he said.

“Amongst the Jewish community, it is often said there is only one degree of separation and throughout the world, in our community, there is today mourning.”

Rabbi Dr Benjamin Elton remarked that a synagogue “should be a place of peace, of prayer, of love”. “The Tree of Life Synagogue was just such a place, but it was transformed by a man filled with hate and rage into one of pain, suffering and death,” he said.

“The scourge of antisemitism is still alive, potent and deadly. At every service in this synagogue and many others, as well as at schools and other communal facilities, an armed guard stands outside, and … it is easy to forget that they are there for a truly terrible and terrifying reason.”

He added, “But protection is just a means to an end, and that end is the continuation of a vibrant Jewish life.

“We will continue to worship in our synagogues, send our children to Jewish schools, manifest every form of Jewish activity. We will endure, we will survive, we will flourish.”

Executive Council of Australian Jewry deputy president Jillian Segal said that “in the wake of the murders of 11 of our brothers and sisters … now is a time for us to express our grief, to feel our pain and to come together to seek comfort from one another”.

“It is not a time for recriminations, or political point-scoring, or for exacerbating divisions,” she said.

NSW Jewish Board of Deputies president Lesli Berger told those in attendance, “Your presence here today means something.”