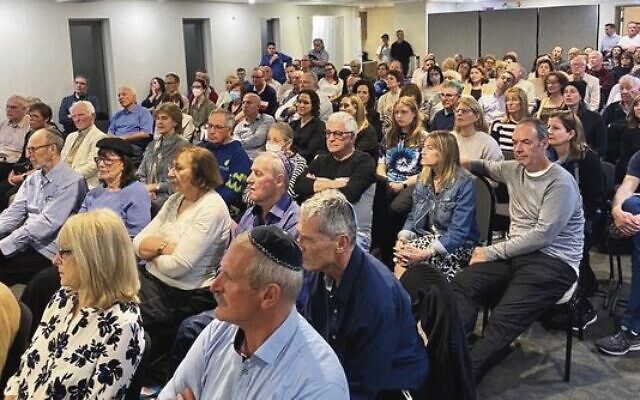 OVER 100 people were moved and inspired by remarkable stories of bravery, courage and hope.

Holocaust survivor Richard Haber and Januk Szurow addressed an audience at a collaborative event hosted by Kehillat Masada, Masada College and March of the Living.

The crowd heard the story about Haber and his parents, who were hidden by the Gelles family and survived the Holocaust as a result. Szurow – whose mother was Danuta Szurow nee Gelles and grandmother was Maria Gelles – told his family’s story.

In March 1943, Irene and Henry Haber and their son, Richard, escaped from the Krakow Ghetto. They reunited with Danuta Gelles, whom they had met in the ghetto, and who had offered to protect them if they got out alive.

Danuta and Maria risked their lives to fulfil the promise and hide the family.

Thanks to this bravery, the Haber family survived the Holocaust.

Danuta and Irene kept in contact their whole lives, with Irene trying to have the Gelles family recognised as Righteous Among the Nations.

Sadly, this was not realised in their lifetime, but their sons, Januk Szurow and Richard Haber, completed the task of having Maria and Danuta Gelles recognised as Righteous Among the Nations.

With opportunities to hear firsthand accounts from Holocaust survivors becoming less frequent, the event was open to all ages.