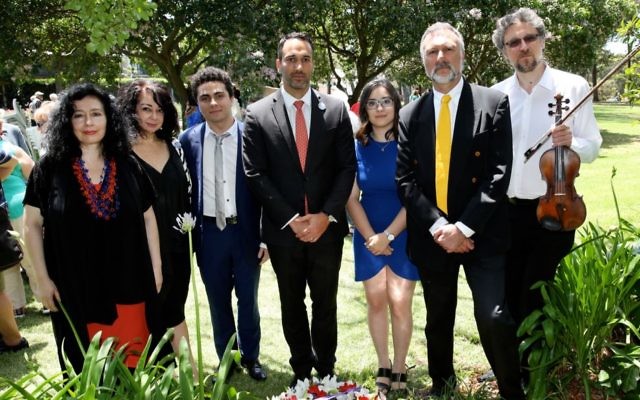 IN a moving and sombre ceremony on Sunday, the community gathered at Waverley Memorial Gardens to commemorate the 75th anniversary of the Babi Yar massacre, in which nearly 34,000 Jews were murdered in two days in Ukraine in 1941.

The event – which was held in memory of the Jews of Kiev who were massacred by the Nazis and their Ukrainian collaborators – also celebrated the triumphant revival of Soviet Jewry in Australia.

Speaking about his recent visit to Babi Yar, Kiev-born Alex Ryvchin – public affairs director of the Executive Council of Australian Jewry who, in 2014, established a plaque to honour the victims – said you have to “close your eyes to see the thousands upon thousands falling into that ravine”.

“Elie Wiesel wrote that there is nothing to see at Babi Yar. And he was right,” Ryvchin said.

“There is no infrastructure of mass murder to remind and educate as at Auschwitz or Dachau.

“You have to concentrate with all your energy to hear their cries in a place that seems so natural and pleasant that it could be this very garden. And that is exactly why we must always remember it. Because what happened there is so hard to comprehend and so easy to forget.”

He said when we remember Babi Yar “we remember all the Jews massacred throughout the vast lands of the former Soviet Union”.

“Over 1.3 million Jews were killed in the former Soviet Union in this way. Every single town, every village and every city has its own ravines and mass graves and killing fields. Its own Babi Yar.”

In the majority of these places there are no memorials and no Jews left to bear witness, Ryvchin added.

“People walk atop the ash and bones of our sacred dead, oblivious to the horrors that transpired there just a few generations ago.

“And if we will not remember, if we will not educate ourselves and others on the full breadth of the tragedy that consumed our people, then who will?”