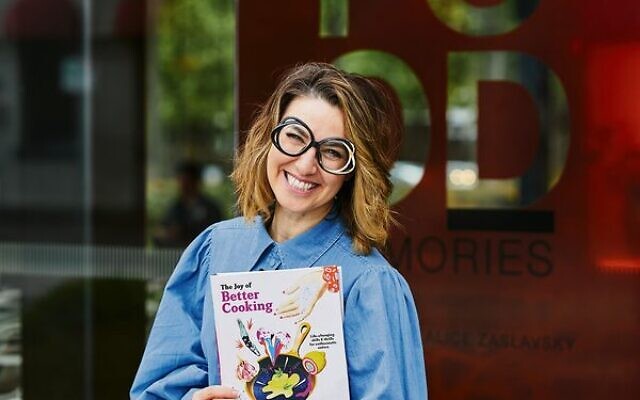 For Alice Zaslavsky, the joy of cooking far outweighs the fear of not being good enough. In fact, she believes that everyone is good enough and there are little things you can do to have the confidence to be an even better cook. It’s what her latest cookbook, The Joy of Better Cooking – which has just picked up the Gourmand World Cookbook Award in the Celebrity Chef category for Australia – is all about.

Described as a vibrant kitchen manual, the real gold lies in the handy tips and tricks included as “bonus bits”. As Zaslavsky, who competed on the fourth season of MasterChef, explains, it’s like she’s standing next to you whispering advice.

“There’s a lot of assumed knowledge for people who are cooking,” she said, explaining that sometimes cookbooks can be daunting because of the belief that people know what they’re doing in the kitchen. “It’s something that our community is very good at with a lot of intergenerational cooking, but it’s not something that everybody gets. The bonus bits are the things I would tell you if I was next to you in the kitchen.”

The bonus bits are even coloured differently, so they stand out, and include things like shortcuts, substitutions, and a skills spotlight.

As she writes in her “Welcome aboard” foreword, “what happens if you missed a stage? Or three? You’re not alone. As we’ve become busier, the intergenerational family experience has become less common … when does the practice plane actually take off to get those flying hours under the belt?”

But the ultimate aim of the book is to throw away the concept of being a “good” cook. Instead, rephrasing it as being a “better” cook.

The Joy of Better Cooking was born out of Zaslavsky’s first recipe book – In Praise of Veg – which has more than 100,000 copies in print around the world and has been translated into 30 languages.

“Often people will say that they bought it, and they love it, but they’re waiting to learn better,” she recalled. “I felt like I had to write a permission slip. Every time you’re in the kitchen, you get better.”

As to how the internet has impacted recipe books, Zaslavsky believes books have become more visual, having a conversation with the reader.

“They’ve evolved to become part memoir, part manual, part personal story. It’s also about the curation. When you invest [in a recipe book], you’re investing in that person’s point of view. When they read my cookbooks, it’s like they’re reading novels,” she said.

For Zaslavsky, the aim of the book is simple – to ensure everyone knows that they have what it takes to be a great cook in the kitchen, regardless of their skill set or their experience.

She writes: “you are already a better cook than you think you are”.

Ultimately, it’s all about the title – finding joy in cooking.

And what a bright, colourful and fun cheerleader The Joy of Better Cooking is.

The Joy of Better Cooking is published by Murdoch Books, $49.99 rrp.