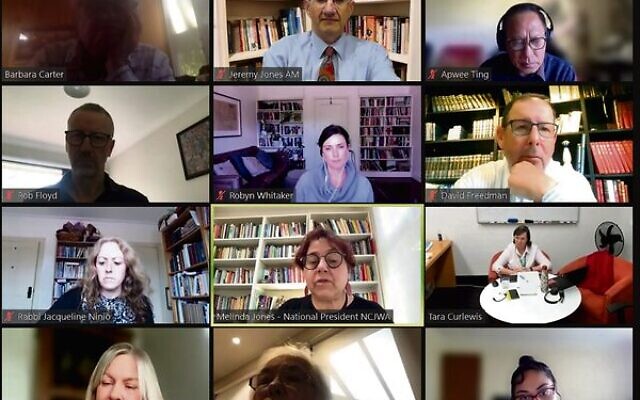 This was the fourth successive dialogue to take place online.

REPRESENTATIVES of the Executive Council of Australian Jewry and the Uniting Church in Australia met virtually for their 52nd National Dialogue last month.

The meeting began with a text study of verses from Genesis (Bereshit) which have been used to both justify and challenge the idea of male superiority.

The meeting then turned to a discussion of family and domestic violence, the history of the way this has been dealt with in Jewish and Christian communities and recent developments in which traditional interpretations have been challenged.

The dialogue was co-chaired by Rev Tara Curlewis and Jeremy Jones. Jones has been the long-term Jewish co-chair of the dialogue while it was Curlewis’ first time as co-chair. She has however previously been a co-chair, with Jones, of the Australian National Dialogue of Christians, Muslims and Jews.

Other participants included National Council of Jewish Women of Australia federal president Melinda Jones, who led the presentations in the text study, and Emanuel Synagogue’s Rabbi Jacqueline Ninio, who made the opening Jewish presentation in the discussion of contemporary religious life.

Central Synagogue’s Rabbi David Freedman contributed with a series of observations of the way Orthodox Jewry had addressed this subject in recent years.

Communal stalwart Josie Lacey, a life member of the Executive Council of Australian Jewry, also made a series of significant interventions.

“We are so fortunate in the Jewish community to have informed, learned and passionate representatives, who have strong personal opinions but make sure that their presentations in dialogues cover a broad spectrum of lived Jewish experiences”, Jones said.

“The Christian presentations were also of the highest order and everybody who participated in the dialogue would have left it better informed as to theological issues and with an enhanced ability to advocate for the dignity of each human being.”

This was the fourth successive dialogue to take place online and he added that all participants looked forward to resuming in person discussions in the near future.

The dialogue began in 1991 at the initiative of ECAJ and Uniting Church leaders to resolve tensions between the church and the Jewish community at the time.