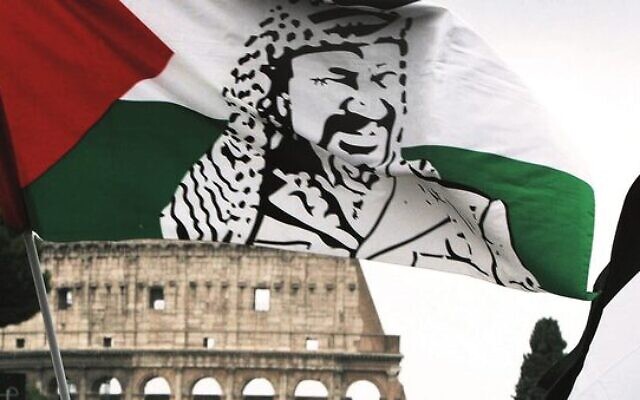 A demonstrator in Rome waves a Palestinian flag portraying Yasser Arafat during a protest in front of the Colosseum. Photo: AP/Alessandra Tarantino

AN Italian government body that oversees the activities of the country’s intelligence agencies will probe documents published last week that appear to confirm long-held accusations that Italy agreed on a deal not to interfere with Palestinian terror attacks on Jewish targets, including a deadly assault on The Great Synagogue of Rome in 1982.

The papers showed that Italian intelligence had clear information on the planned assault on the shule, in which a two-year-old boy was killed, but did not stop it, and police even reduced security around the building.

“Thirty-nine years after the terror attack in the synagogue of Rome, the time has come for us to hear the truth,” Enrico Borghi, a member of the Italian Parliamentary Committee for the Security of the Republic (COPASIR) told La Repubblica last week.

“A state must fully come to terms with its own history,” Borghi added, as the committee began laying the groundwork ahead of officially probing the recently released documents, Channel 12 news reported, citing Italian media.

The allegations have been known since 2008, when former Italian prime minister and president Francesco Cossiga told Yedioth Ahronoth that Italy had “sold out its Jews” and signed a deal that gave Palestinian terror groups a “free hand” to operate against Jewish and Israeli targets in Italy in exchange for not attacking other Italian interests.

“In exchange for a ‘free hand’ in Italy, the Palestinians ensured the security of our state and [the immunity] of Italian targets outside the country from terrorist attacks. As long as these objectives do not collaborate with Zionism and with the State of Israel,” said Cossiga.

At the time, the allegations were strenuously denied and Cossiga was portrayed as delusional.

According to the documents, Italian internal intelligence sent several warnings to the government that groups of Palestinian students “intended” to attack Jewish targets in Rome. At the top of the list of possible targets was the synagogue.

A follow-up warning cited a “usually reliable source” as saying the Abu Nidal group planned to carry out an attack during the holiday period and was likely to hit Jewish sites as the Israeli embassy was too well guarded.

“A usually reliable source reported that Palestinians residing in Europe would be ordered to prepare to carry out a series of attacks on Israeli or European Jewish targets,” the cable warned.

Despite the warnings, not only was security not increased, but on the day of the attack, the police vehicle that usually stood outside the synagogue on holidays was absent, the documents showed.

The assault came in the weeks following the Israeli invasion of southern Lebanon in a bid to prevent terror attacks by Palestinian factions on northern Israel.

In the weeks preceding the attack, Palestine Liberation Organisation leader Yasser Arafat had visited Italy, where he was received by the pope, the president and foreign minister and greeted with a standing ovation at a session of the Interparliamentary Union.

According to the reports, the deal was signed as far back as 1973 by prime minister Aldo Moro with Arafat’s PLO and George Habash’s Popular Front for the Liberation of Palestine, which promised not to conduct terror attacks on Italian soil in exchange for Italy allegedly pledging its political support for the Palestinians.

On May 9, 1978, Moro’s body was found, riddled by bullets, in the back of a car in the centre of historic Rome. He was kidnapped by Red Brigade terrorists after a bloody shootout near his home.

The first documents indicating the existence of the deal were uncovered during investigations into the killing of Moro.